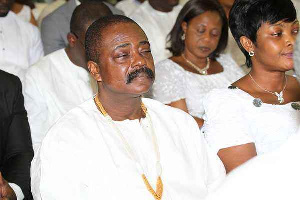 The founder of the now-defunct media organization, Radio Gold, Kwasi Sainti Baffoe-Bonnie has passed away.

According to a report from Starrfonline, Kwasi Sainti Baffoe-Bonnie died Monday, February 1, 2021, after battling a short illness.

The NDC affiliated station, Radio Gold was shut down about two years ago by the Akufo-Addo government over non-payment of regulatory charges.

The National Communications Authority (NCA) explained that Radio Gold and Radio XYZ were shut down because they failed to comply with the ruling of the Electronic Communications Tribunal (ECT).

The late Sainti Baffoe-Bonnie was the Board Chairman of the Ghana Air Catering Services from 2006 to 2007.

In 2009, he was appointed as the Senior Political Advisor to NDC flagbearer, John Dramani Mahama.

From 2012 to 2016, Mr. Baffoe-Bonnie served as a Presidential Staffer and Senior Advisor on Political Affairs to the President of the Republic of Ghana.