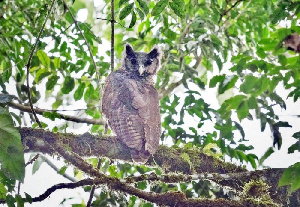 • It is home to some of the rarest species of animals

• Two researchers have photographed a rare owl at the forest

Newsweek has reported that an enormous owl, a Shelley’s Eagle Owl, that has eluded researchers for around 150 years, has finally been photographed in Ghana’s Atewa Forest.

The Shelley’s Eagle Owl – an animal desperately sought after by birdwatchers since reports of sightings have often been unconfirmed, first emerged in the 1870s but has since only had glimpses of its species caught elsewhere.

However, only last week, the report added, two researchers snapped a crystal-clear shot of this rare bird, perched on a branch in Ghana’s Atewa forest.

Joseph Tobias from the Department of Life Sciences at ICL, and Robert Williams, a freelance ecologist, found the bird.

“There is no other owl in Africa’s rainforests that big,” said Tobias in a press release.

It is reported too that although they were surprised seeing such a huge owl, the two researchers gathered themselves together in time to take a photo of the elusive owl.

“It shows the bird with its head rotated around 180 degrees, appearing to look directly at the camera.

“The clarity of the photo is significant according to ICL. It described a previous image, taken in 1975 at Antwerp zoo, as “grainy,” and another “from Congo in 2005 as certainly not the right species,” the report said.

Nathaniel Annorbah, from the University of Environment and Sustainable Development in Ghana said Tobias and Williams’ discovery was “sensational.”

“We’ve been searching for this mysterious bird for years in the western lowlands, so to find it here in ridgetop forests of Eastern Region is a huge surprise,” he is reported to have said.

BirdLife International, an environmental group, said the Shelley’s Eagle Owl is listed as vulnerable with its decline in part, due to the clearance of its habitat by humans.

The group is also part of lobbyists for the Atewa forest to not be turned into a national park, as is the plan by the current government as the place serves as home to many rare species of animals.

“Hopefully, the discovery of such a rare and magnificent owl will boost these efforts to save one of the last wild forests in Ghana,” Williams added.