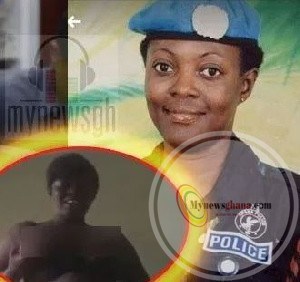 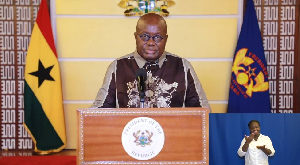 LIVESTREAMED: Akufo-Addo’s 22nd address to the nation on measures to fight coronavirus

MyNewsGh.com has confirmed that Detective Inspector Yaa Boakyewaa who has been fired by the Special Prosecutor, Martin Alamisi Burnes Kaiser Amidu for leaking confidential information and documents to unauthorized persons is the same person captured in the infamous leaked bonking tape.

The cop with the Criminal Investigation Department (CID) prior to be moving to Accra from Sunyani in May last year, was captured in 3-minute viral leaked tape twerking seductively amidst other indecent acts and videoing it.

It is not known who the video was meant for but sources suggest she produced it for her boyfriend who was not in the country but it landed in wrong hands and subsequently got leaked first on social media and mainstream media.

Soon after the issue had naturally died down, she was quietly assigned to the office of the Special Prosecutor in February this year but her irreconcilable differences with Citizen Vigilante has led to the ‘no nonsense man’ asking her to pack.

Mr. Amidu is demanding that the Inspector General of Police, David Asante Apeatu removes her from the Special Prosecutor’s office for exhibiting gross insubordination and impudence in his presence when she was marched to his office to sign a letter of receipt of her suspension letter.

“She continued rudely and very insubordinately and had the impudence to tell me in the presence of the Deputy Special Prosecutor, the Secretary to the Office, the acting Head of the Investigations Division, and a senior officer of the Bureau of National Investigations (BNI) that I had no right to address her as a Sergeant when she had been promoted to an Inspector.”

Previous Drivers to march over bad roads
Next JUST IN: Asamoah Gyan reveals he is once again available after Nana Addo request

George Andah, a former Deputy Minister of Communication, has won a GHc250,000 defamation suit against …