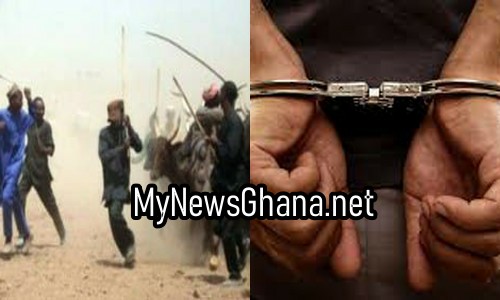 One person was killed while seven others have been arrested when they attacked Fulani herdsmen at Tingakrom, in the Bono East Region, on the Kintampo-Bole Bamboi road, last Friday.

The robbery gang, including a taxi driver, allegedly robbed Fulani herdsmen of their cattle.

The Kintampo Divisional Police Commander Assistant Commissioner of Police (ACP) Francis Annor, who confirmed the story to Ghanaians Times, said the arrest was made by combine effort of the police and members of the community, Tingakrom.

He said Kwabena Gyan, identified as the owner of the taxi cab with registration number BA 3509-13, which was being used for the robbery, was killed by irate youths of the Tingakrom community.

ACP Annor stressed that the robbers attacked and attempted to rob herdsmen at Tingakrom, but the town folk engaged them, leading to the death of one of them through gunshots.

“When the police got wind of it, the people managed to arrest seven of them, including the taxi driver. The suspects stole the cattle and were escaping when the people assisted the police to arrest them,” ACP Annor said.

He said the suspects were currently in custody at Kintampo Divisional Police Command assisting in investigations.