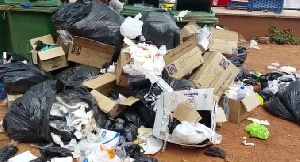 About seven hundred members of the union workers at the TTH, a significant number of these workers are cleaners whose main duty is keeping wards and the hospital environment tidy.

As at 10:30 Wednesday morning dustbins placed at vantage points within the facility including the emergency ward, were yet to be emptied. The usually clean corridors and stairways were dusty with polythene bags and empty sachets of yoghurt flying around.

A heap of refuse is gradually growing in front of the accidents and emergency ward. Washrooms in the facility are unkempt as the tiled floors are dirtied by a mixture of sand from footwear and water, whilst the sinks are littered with empty sachet water bags.

The Public Relations Officer of the TTH, Musbawu Mohammed, revealed that the strike has affected impacted health delivery at the hospital including the polyclinic which provides primary health care.

“There are patients who actually need Oxygen and even though we have our Oxygen plant, the plant is connected to some specific areas such as the accident and emergency, the obstetrics and gynaecology and the medical ward.

“But the paediatrics and surgical wards are not connected to the central Oxygen plant. For that reason, we use Oxygen cylinders to supply these wards. As we speak, some of these wards are running out of Oxygen, so the strike is having a huge toll on the hospital”, he disclosed.

Some doctors and nurses also told GBC News that, the strike had increased their burden.

“This morning nurses had to tidy up the place before attending patients, it is someone’s job to clean the place, now the nurse is adding that to her responsibility “, a doctor at the Accident and Emergency ward lamented.