struc SAD VIDEO: This blind couple have to climb trees, weed before they get food to eat - Home Of Ghana News 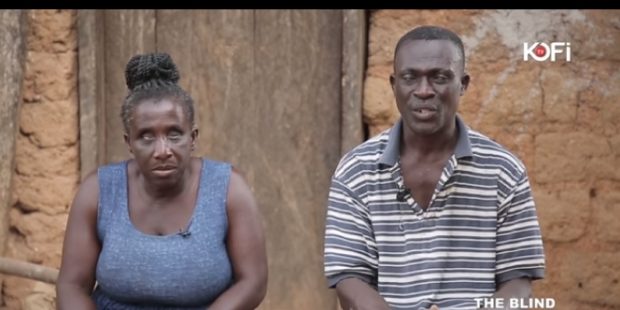 A disturbing, emotional story of a blind man, and his blind wife, and how they have to climb trees before they are able to feed, has made its way to the internet.

Speaking with Kofi TV on YouTUbe, Samuel Kumi Dacosta, 55, and his wife, Ama Kuma, spoke about how they each found out they were blind at very early stages of their lives, and how they have managed to live the rest of their lives together.

Currently engaged in the trade of making mud blocks for buildings, Samuel supports his wife, who also helps around with the gathering of firewood for sale.

“I schooled a little but when I was in Form One, I got blind. I used to be someone who really loved schooling and looked forward to pursuing it as far as possible, to give myself a good future but due to many obstacles brought this blindness on me.

“I was very worried when it happened because I wasn’t sure where and how I was going to get help but I had to encourage myself and learn a few trades just so I could survive,” he said in Twi.

One of their sons, who lives with them, Caleb Kojo Dacosta, 17, shares how little of a social life he has because of his parents, as well as the unimaginable challenges that his parents go through just to be able to put him through school.

“When I was born and noticed they were both blind, I was very sad because I didn’t know what they did to deserve this. There are days I wonder how it is that my dad is blind but he has always told me that it was when he was in school that he suddenly became blind.

“Because of my father’s situation, I could not go to boarding school and so I had to remain a day student. And, I also don’t have any friends I can play with also because I am always around so that if my dad needs help, he can send me,” he said, amid tears.

He also described how they have to go to the farm just to get some foodstuffs to sell and get money for him to go to school.

“At times too, I take him to the farm so that he can cut down bamboos to bring home. He also goes there to harvest cocoa, and at other times, he would have to go weed under people’s cocoa farms so that he can get some money for me to go to school,” their son added.

Without any proper source of income to take care of their children, all but Kojo have sojourned for better opportunities, their mother narrates.

Why Owusu Bempah was arrested?