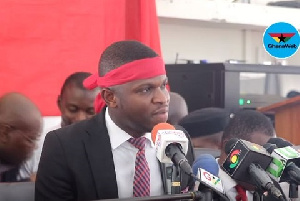 Sammy Gyamfi posted a video of President Akufo-Addo, with the caption,

“Greetings to “Papano”, who is famed for groping women, has slept with more than half of his female appointees and has rewarded them with juicy appointments.” In his concluding tweet, he tagged Information Minister, Kojo Oppong Nkrumah as gay.

His comments come on the back of events that unfolded in parliament Friday evening.

Ofoase Ayirebi Member of Parliament, Kojo Oppong Nkrumah, whilst making submissions during a debate on the Agyapa Royalties Limited Agreement referred to his colleague MP, John Jinapor as ‘Papa no’.

Explaining himself however, after Majority Leader, Osei Kyei Mensah asked for clarification as to who he was referring to as ‘Papa no”, the Information Minister said, citing order 47,

“Mr. Speaker, in line with order 47, of the standing orders of this house, that says that the proceedings of parliament shall ordinarily be conducted in the English language but a member, may exercise the option to address the house in either Akan, Nzema, Ga, Ewe, Hausa Dagbani or any other language provided provision exists in the house for its interpretation. Mid-way into my submissions, I said I wanted to encourage my colleague whom we will refer to in my language as Papa no who just spoke.”

The comments attracted reactions from the minority members who expressed gross displeasure.

You must be ashamed of yourselves – Afia Pokua scolds Nkrumah, Gyamfi over ‘Papa no’