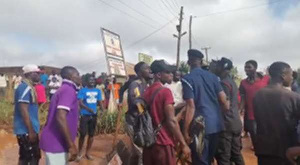 Police in the Ashanti Region have clashed with hundreds of aggrieved residents of Santasi protesting against deplorable roads in the area.

The residents on Monday, October 4, 2021, took to the streets of Santasi Apire in the Kwadaso Municipality of the Ashanti Region in protest of poor road networks in the area.

The demonstrators including taxi drivers, a youth group called Apire Concern Residents Association, together with hundreds of aggrieved Apire residents blocked the Santasi-Apire main road amidst chants on early Monday morning to register their disappointment.

Two police officers deployed to the area to ensure peace had to call for reinforcement after residents stopped them from clearing the road for commuters amidst heated arguments.

A team of armed policemen numbering 20 rushed to the scene also failed to calm the nerves of the agitated residents after they (residents) prevented them (police) from removing the blockades.

It took another batch of armed police officers numbering 30 to clear the road for motorists.

Speaking to the media, some of the protesters said they were angry due to the increasing number of accidents on the road.

“Two people have died in the last three days because of this poor road and so we will not sit aloof for our family members to die again on the road,” one Mr Daniel Owusu, a resident of Apire lamented.

The roads as captured during the protest have been rendered muddy and slippery with other areas flooded due to the prolonged rainfall in the area.

Some bridges and drainage systems that were constructed to check erosion and floodwaters on the road were washed away by the recent floods.

The Residents have therefore called on authorities to fix the road for them with alacrity or they will demonstrate again.