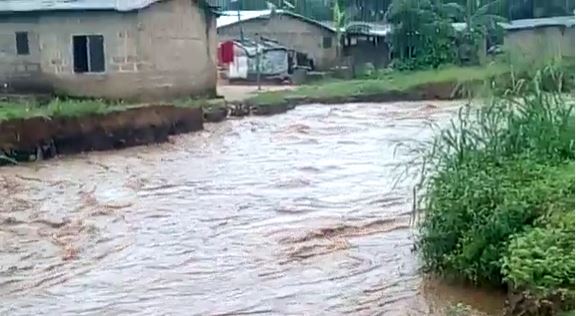 The victim, Nafisah Mumuni a class three (3) pupil of King of Kings Preparatory school allegedly drowned while walking in the floods with her elder sister to the house after closing from school.

A search team made up of Police, NADMO, and residents led by the Assembly Member for the area Benard Acheampong searched for the victim in the Nsukwao drainage facility till 6:00pm yesterday but to no avail.

School authorities declined speaking on the incident during a visit on Wednesday morning.

The Koforidua -Sentimental area was the worst affected after an hour and half downpour on Tuesday.

The Eastern Regional Capital, Koforidua has been experiencing serious floods for about two months now after every heavy downpour.

On Monday, September 13, 2021, a two-hour rainfall in the Municipality saw one of the worst floods ever.

Some houses and walls collapsed as the floodwaters violently entered homes.

Many domestic animals particularly dogs, cats, sheep, goats, and fowls were drowned and carried away by the floods.

Dozens of residents were displaced.

Related Topics:DOWNPOURKoforiduasearch continues
Up Next

‘Under Dampare, every foolishness has its limit’ – Manasseh pokes Shatta Wale