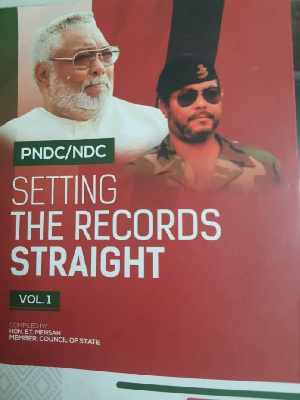 The unveiling took place at the International Conference Centre at about 1400 hours on Friday, October 15, 2021.

The book chronicles a journey of nostalgic reminiscence of the torrid tides buffeting the ship of state before the advent of the Provisional National Defence Council (PNDC) on Thursday, December 31, 1981.

It also tells the story of the policies, plans, programmes, and projects of the Rawlings regime, which include the famous Economic Recovery Programme (ERP), the Junior and Senior Secondary Schools (JSS, SSS) Concepts and Improvements in the sanitation situation in Ghana.

It also captures the development of Youth and Sports, the foundation of primary healthcare programmes, the genesis of Land Administration reforms and Land Title Registration, Local Government reforms, and the mapping of mineral resources.

At the very colourful and well-patronized Event, which was graced by very eminent persons of the Republic of Ghana, E.T. Mensah’s Book was outdoored.

The Book, situates the PNDC’s achievements in proper history; and gives the genesis of the birth of the NDC.

In his Welcome Address, E.T. Mensah, gave credit to the Leader of the PNDC/NDC, Jerry John Rawlings, and paid glowing tribute to the TEAM that he (E.T.), worked with.

“It is teamwork that made us all strive very hard to contribute our worth to those heady days when we had no template for nation-building; and had to create our own templates”.

The Foreword of the book was written by Jerry John Rawlings in September 2020, before he passed on, on the 12th of November the same year.

The event was chaired by, Nene Nagai Kassah VII (known in private life as Mike Afedi Gizo); the Book was reviewed by, Dr. Benjamin Kumbuor; the book was launched by, Ambassador Dan Abodakpi; the book was auctioned by, Honourable Fritz Baffoe, Koku Anyidoho, was the MC.

Members of the Council of State, led by, lawyer Sam Okudzeto (not the MP), and Professor Margaret Amoakohene, were also present.

Though John Mahama, Samuel Ofosu-Ampofo, Johnson Asiedu-Nketiah, were invited, they refused to attend.

E.T. Mensah said one cannot “fail to appreciate the candour that the story is not all about the glitz and glamour” adding, “there were shortcomings as well! How were the shortcomings navigated?”

The book, he said conclusively, sets the records straight on “how a crucial journey of nation-building began with, raw determination, and unwavering zeal, a passion to die for the country, bodies that did not know pain, hearts that pumped the blood of the nation, and the grit with which a group of men and women anchored their faith firmly to – “God Bless our Homeland Ghana and Make our Nation Great and Strong.”