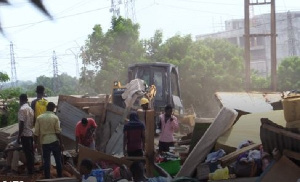 • The Accra-Tema Motorway is inundated with several illegal structures

A team of police officers and local assembly officials on Friday, October 8, 2021, supervised the demolition of several illegal structures along the Accra-Tema Motorway.

This follows a similar exercise carried out by a team led by the Greater Accra Regional Minister, Henry Quartey in the same area about a month ago.

The latest exercise was led by the Municipal Chief Executives of La Dade-Kotopon and Ayawaso North.

Some affected settlers along the motorway during the exercise appealed for government support after their habitats were dismantled by the team.

“I don’t stay here because I like the place, but because of life challenges. So it was my plan to stay here even though the place isn’t safe to earn something little and relocate.”

“In fact, we have even started looking for accommodation, but we haven’t got some yet, but they have come to demolish the place without even assisting us to get some place to go. We have been here for almost 5 years, but it is not easy for us,” one of the dwellers said.

Portions of the Accra-Tema Motorway over the years have been encroached by squatters who end up erecting makeshift structures along the route.

The Ghana Statistical Service in its preliminary report on the 2020 population and housing census noted that about 11% of structures in the country consist of metal containers and kiosks.

The census report also listed a little over 20 percent of structures in Ghana are listed as uncompleted.

The GSS further reports that there exist 10,661,421 structures in Ghana.