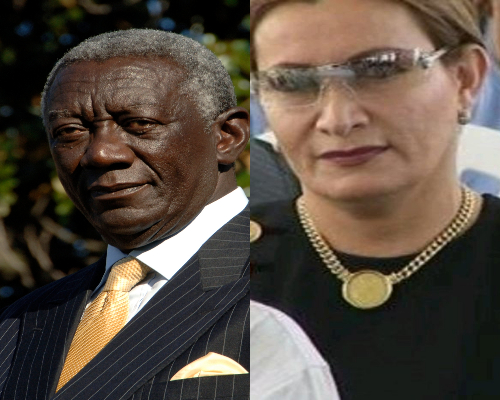 Former President John Agyekum Kufuor became ‘hot’ between 2004 and 2005 after he was accused of having extramarital affairs with his ‘one-time Economic Advisor’ Giselle Yazji.

Madam Giselle Yazji nicknamed ‘Yaa Agyeiwaa’ made headlines as the media began to track controversies involving reports of her work with then-President Kufuor.

Madam Yazji described herself as President Kufuor’s mistress and claimed that she and the Ghanaian statesman had given birth to a set of twins.

It was speculated that DNA tests conducted showed that he, Kufuor was the biological father of the twins.

To prove a point, Giselle Yazji promised to return to Ghana with the supposed children on a scheduled date.

Some journalists, political opponents, and gossipy Ghanaians stormed the Kotoka International Airport to catch a glimpse of the controversial woman who claimed was ready to expose the President — but she didn’t show up.

It was later explained that Madam Yazji’s inability to touch down in Ghana was a result of flight cancellations attributed to bad weather.

It’s been sixteen years since Giselle Yazji made the allegation. Ex-President John Agyekum Kufuor has responded in a recent interview on Angel FM monitored by Kasatintin.com that he is still waiting to see his supposed twins.

Kufuor described the alleged sex scandal as ‘pure propaganda’ manufactured by his political opponents to ruin his administration.

He said ‘it is never true I had twins with anyone; if indeed it is true as people wanted us to believe then and went to the airport to meet her but she never showed up, where are the children…’.

‘It was pure propaganda and as the nation moves on, we should avoid those kinds of propaganda because they are inimical to our nation’, Kufuor added.

This is perhaps the biggest sex scandal and the dirtiest but cheapest propaganda in the political history of Ghana.

He was nicknamed ‘the Gentle Giant’ and ‘Mr. Sexy Eyes’.

Related Topics:KUFOURside chick
Up Next