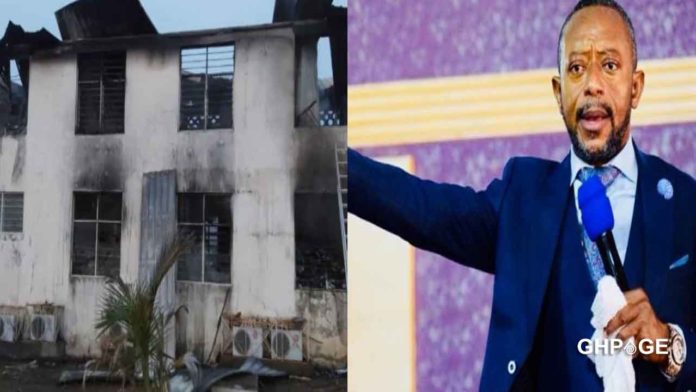 MyNewsGhana, yesterday shared the story about the unfortunate incident at the Electoral Commission office

The Greater Accra Regional Electoral Commission office located at Sapeiman near Amasaman. It was reported that the sad incident happened at dawn around 2:30 am.

About four water tenders from the Fire Service offices in Amasaman, Kotoku, Nsawam, and Abelemkpe were called to quickly to drench the fire.

Prior to the fire outbreak at the Electoral Commission Office in Accra, Rev. Isaac Owusu Bempah of Glorious Word and Power Ministry during a prophetic service in his church gave a prophecy about it.

According to him, the Lord revealed to him that there was going to be a fire outbreak at the EC office just after the New Voter’s registration ends. He said this a few days before the eruption.

In a video that captured the moment Rev Bempah giving the prophesy, he said also that the life of the EC Chairperson in the person of Jean Adukwei Mensa is in great danger hence must be protected.

On the fire-outbreak again, Rev Owusu Bempah said, the Lord has revealed to him twice. Adding that he saw it very clear.

WATCH THE VIDEO OF THE MOMENT REV. OWUSU BEMPAH GAVE A PROPHESY ABOUT THE FIRE OUTBREAK AT THE E.C OFFICE IN ACCRA;

This is not the first time Rev. Owusu Bempah has given a prophecy about the country. His words from God are powerful.

PHOTOS: Badu Kobi, Obofour, others at final funeral rites of ‘Apraku My Daughter’