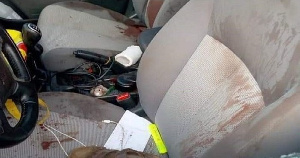 The Mfantseman Constituency branch of the New Patriotic Party (NPP) has denied reports suggesting the driver of the murdered Member of Parliament, Ekow Quansah is dead.

According to the party, the driver went into coma and has since regained conciousness.

Speaking to Citinews, the Constituency’s Communications Director, Dr Nana Yaw Agyenim-Boateng, said “on Friday, a call came that the driver of the late MP has also passed on so we called the doctor at that particular hospital who confirmed same but later in the day, news also broke that he (the driver) went into a coma, and he is back from the alleged coma.

“So I called the constituency Chairman who is also close to the late MP’s driver that this is what I have heard, and he confirmed that the man is alive,” he said

The Member of Parliament for Mfantseman Constituency, Ekow Quansah Hayford, was shot by suspected armed robbers on the Abeadze Dominase–Abeadze Duadzi–Mankessim road when returning from a campaign trip on Friday, October 9, 2020, around 1:00 am.

It was reported that despite indicating that he was an MP when he was attacked, the assailants went ahead to shoot him.

Meanwhile, the Inspector-General of Police (IGP), James Oppong Bonuah has dispatched specialised investigators from the homicide and anti-armed robbery units of the CID headquarters to the Central region to probe the case.

Two killed, another injured in bloody clash at Ejura market