The two stories though distinct, elicited numerous reactions on the platform due to the persons involved and their attachment to certain political figures.

The week was capped off with the relatively bigger story of a Canadian-based Ghanaian lady’s allegation against a top political figure but before that saga was a ruling by the Accra High Court on a defamation case filed some four years ago.

The case that has come to be known as ‘Sintim vs Ocloo’ involves one Francis Kennedy Ocloo who is best described as a social media influencer and Efua Sintim who is a member of the feminist group, Pepperdem.

Facts of the case

Francis Kennedy Ocloo who is also known on the platform as “Awareness General” was accused by Efua Sintim as having made some social media publications in May 2017, which she said were injurious to her person and reputation.

Kennedy Ocloo is said to have described Efua Sintim (the plaintiff) as a “bloodsucker Gey Hey female who uses her looks to extort money from unsuspecting men.”

He among other things, cast aspersions and insinuations on the plaintiff and failed to restrain his followers who equally fired direct shots at the plaintiff.

Efua Sintim who was represented by Dr. Justice Srem-Sai argued that despite her name not being explicitly mentioned by the defendant, she was fully convinced that she was the target of the posts.

After four years of legal tussle, the court passed a verdict upholding the argument by Efua Sintim that she was indeed the subject of defamatory statements by Kennedy Ocloo.

The court thus fined the defendant a total amount of GH¢110,000 and also instructed him to apologise to Efua Sintim via the same platform on daily basis for thirty days.

In his response to the ruling on his Facebook handle, Kennedy Ocloo hinted of a possible appeal of the verdict, stressing on his argument that no name was mentioned in his posts.

“I defended myself that to the best of my knowledge I have NOT made any defamatory statements of anyone, I still stand by that. Indeed, it is noteworthy to say that THE PLAINTIFF ADMITTED UNDER CROSS EXAMINATION that I DID NOT, HAVE NOT MENTIONED HER NAME ANYWHERE on this space.

“Indeed statements I have published here, every now and then people come and ask me who is it about. This means that a single post I make more humans can claim ownership; it could be one of such. I have communicated to my Lawyers on the next action to take and would brief you in due course,” he posted on Facebook on October 26, 2021.

Efua Sintim has meanwhile thanked her legal team and the court for serving what she believes to be justice.

She also wrote about the trauma she endured as a result of the publications by Kennedy Ocloo and was grateful to her father and other social media users who played active roles in the case.

Read their responses below 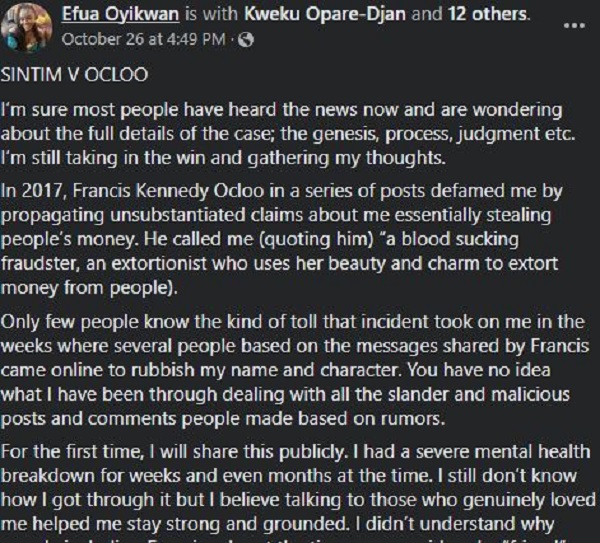 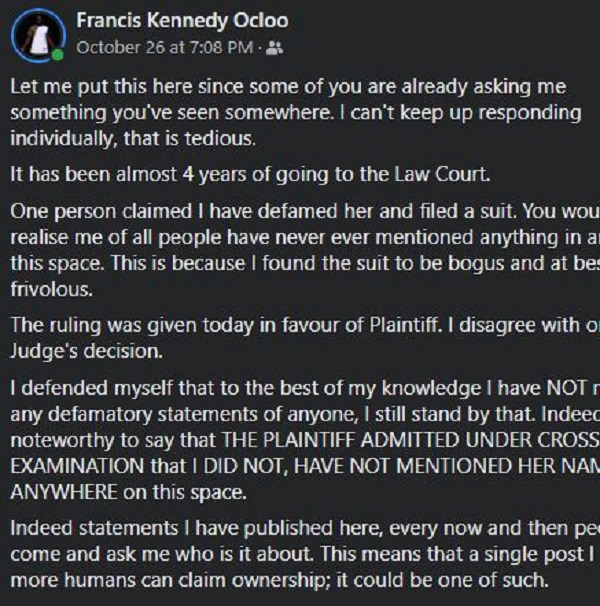 Source: www.ghanaweb.com
Related Topics:OclooSintim
Up Next

‘Trotro’ driver arrested for urinating on a Highway after viral video