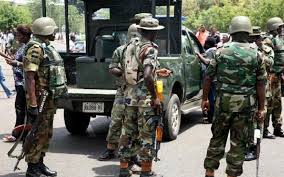 Authorities of Sofoline Transport Union Association have resolved to employ the service of soldiers to clamp down commercial drivers who will be spotted loading and off- loading passengers within the traffic lane and on the shoulders of the high way in front of the lorry terminal.

The soldiers according to information gathered by THE PRESS RADIO will commence full action tomorrow 12th March 2019 and will be positioned to operate on the sofoline high street.

All recalcitrant drivers who fall prey to the grips of the armed military men according to executives of the association will have their vehicles confiscated, towed to Kwadaso municipal assembly and will on the same day be processed for the necessary court action.

According to the newly instituted regulatory code, all commercial vehicles, buses excluded are to off load within the lorry terminal, after which move out by the exit route to their respective destinations.

Commercial drivers under this new regulation are barred from stopping, loading and offloading at all unapproved areas on the high street.

All petty traders who have occupied pavements with their trade are also expected to follow suit by vacating their current positions to secure a place within the terminal.

The soon to be staged military action according to the Chairman for the association Chairman Albert Boamah forms part of measures that seek to ensure that vehicular congestion, flouting of road safety regulations and occurrence of accidents at the area in question are totally eliminated.

Chairman Boamah in a strictly exclusive dialogue with this journalist gave a mournful flash back on the number of accidents that have occurred at the spot which owe to the aforementioned canker.

He shared his lamentation on the number of pedestrians who within the space of a year have been run over and killed by vehicles with faulty brakes, adding that “…it appears that each moment somebody is knocked down by a vehicle”.

It is on record that eight pedestrians were killed by a long journey track on the shoulders of the traffic lane in front of the terminal two years ago at a time the area was congested with commercial vehicles.

Previous Price of bread to go up by GH1.00
Next Ground-breaking as women referees nominated for U-17 AFCON