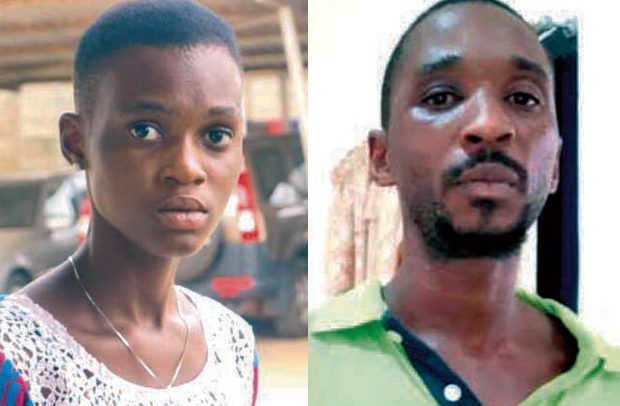 A photograph of one of the four missing girls in Takoradi was found on one of the mobile phones retrieved from the room of one of the Nigerian kidnappers on trial in connection with the killing of the girls.

According to Detective Chief Inspector Dorcas Asare of the Criminal Investigations Department (CID) of the Ghana Police Service (GPS), it was Priscilla Mantebea Koranchie whose picture was found in Samuel Udoetuk Wills’ room.

Detective Asare, who is the 23rd prosecution witness in the case, told a Sekondi High Court, presided over by Justice Richard Adjei-Frimpong that some mobile phones were retrieved from the room of Wills as part of the investigations into the case.

She told the court that on December 22, 2018, she went to the room of the suspect at Kansaworodo and retrieved some phones and when she opened one of them; she saw the picture of Priscilla Koranchie while she was alive, and that the picture was still on the phone with MTN number 055 090 5425.

She said an amount of GH¢784.00 which was concealed under the suspect’s underwear was also retrieved after his arrest.

According to the Police CID, after scanning through about four mobile phones that were retrieved, it was revealed that the suspects had conversations with the missing girls, some relatives, his girlfriend, Emily Alimo and the second accused person, John Oji.

Detective Asare later presented the itemized calls by the suspect from the telecommunications companies, to the court as exhibits.

She also mentioned other items that were retrieved from the septic tank and the well from which the skeletal remains of the girls were removed as: set of ladies’ underwear, three sets of nylon robes, natural hair, head scarf, artificial twisted wig and natural twisted hair.

The rest included multicoloured beads, blue and white beads, a black ladies’ pant, a ladies’ vest and a T-shirt from the room of the first accused person.

She said Wills said in his statement that he lived with his fiancé and that in July 2018 his fiancé went to take care of her sister’s baby in Koforidua.

He mentioned in the statement that in August 2018, his fiancé called to inform him that someone had called Wills’ AirtelTigo number she was using that he (accused) had kidnapped one Priscilla Blessing Bentum who resided at Diabene near Takoradi.

The investigator said the accused denied it in his statement but said he was later arrested by the police while he was with a friend’s at Kansaworodo near a block factory.

The presiding judge adjourned the case to November 16, 2020, for some video recordings to be played in court after which the lawyers for the suspects would be cross-examining CID Dorcas Asare.