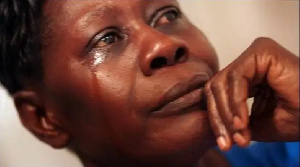 • Upon her return, she saw her son burning into ashes

Vida Asieduaa, the mother of the two-year-old boy who died when a speeding fuel tanker carrying diesel from Kumasi, caught fire after hitting a parked commercial bus on reaching a sharp curve in that community, said she was helpless when her son was burning into ashes.

According to him, she left her son, Kwaku Ernest and his father who is suffering from a stroke home and went to the farm. When she was returning, she heard the community members wailing while others were running for their lives.

Aside from the two-year-old Kwaku Ernest, the tanker driver and his assistant also died as a result of the explosion which occurred on Monday, May 24.

Vida Asieduaa told Pure FM’s Osei Kwadwo that, “I realized that there is a fire outbreak in the community and I couldn’t come near the fire to save my son. After the incident, I was told someone went to our house and saved my husband but the person was not aware that my son was in the room.”

She said her “son tried to leave the room because of the heat but he fell down and he couldn’t wake up till he got burnt beyond recognition.”

The unfortunate disaster saw more than 15 houses burning leaving about 150 people of Onyinanumfo in the Ahafo-Ano South-West District of the Ashanti Region displaced while some properties worth thousands of cedis destroyed.

Meanwhile, the government has commiserated with the families of the three persons who perished.

Eric Nana Agyemang-Prempeh, Director-General of the National Disaster Management Organization (NADMO), upon his visit to the community described the incident as unfortunate.

He told the media that, “We are deeply saddened by what has befallen this community, and would continue to stand solidly behind all those affected in the calamity.”

He presented some relief items to the victims.

They include 20 packets of roofing sheets, 50 mattresses,100 pieces of blankets, mosquito nets and insecticide.

He also presented 20 bags of cooking oil, soap and quantities of second-hand clothing to them.

Related Topics:Tanker explosion
Up Next

Four mourners including a child perish in Nkawkaw road crash