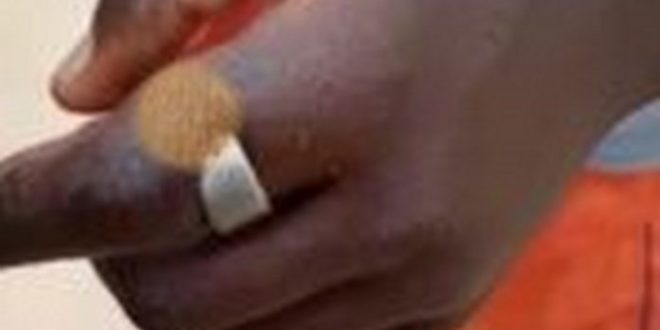 The teenager, identified as Emmanuel Otabil, has admitted he picked up the ring which was on a table while they played a video game at Kasoa Iron City on Friday.

According to him, the ring owner is a very good friend who lives adjacent to his house, hence they play together.

“I saw the ring when we went to play the game and after I took it, my friend’s sibling told me it was for him but my reply was since he is my friend, I can wear it and return it anytime he needs it,” he disclosed on Accra-based radio station.

However, master Otabil, explained his nightmare started after he took the ring to sleep since he did not know that was detestable.

“I woke up on Saturday morning feeling pains and I attempted to remove it but to no avail. So my friend came and used a hacksaw blade and a plier but they were only able to cut a part of it and the rest started entering my flesh,” he narrated.

He noted that he could still not understand what made him pick the ring as he got attracted to the ring immediately he spotted it.

Meanwhile, his mother, Sabina Otabil, who also spoke in the same interview, narrated she was not really bothered at the initial stages.

According to her, on Saturday, she saw her son rubbing soap on his hand and still didn’t know what was wrong or bothered to find out.

“It was around midday, I saw that people had gathered around him and someone came to inform me about the incident and my reply was that he should send the ring to wherever he picked it from but it later became serious,” she said.

Speaking on how they managed to get the ring off his finger after efforts from welders among others proved futile, she said a spiritualist came to their rescue.

“After the ring came off, I cleaned it and took it to the owner’s house but he was not there so I left it with the mother.

“But I was home when the mother came that her son has rejected the ring and demands a new one and I also told her I can’t keep it so she should take it back,” she added.

Though she said her son is steadily responding to treatment, she noted there had been an attempt on their lives as a group of unknown men forcibly stormed their house.