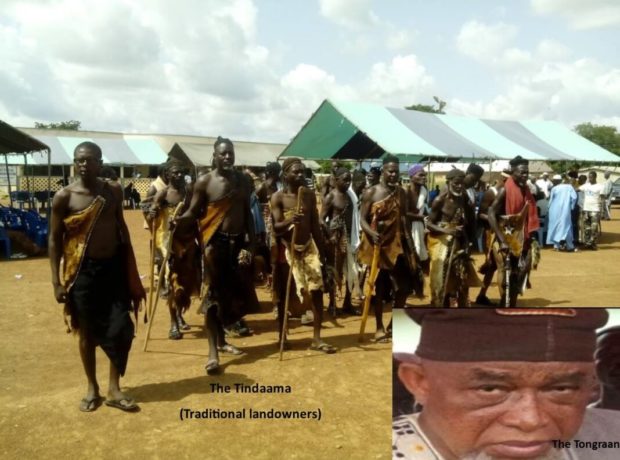 Tension is rising in Talensi, a mineral-rich district in the Upper East Region, as traditional landowners (Tindaama) and the Paramount Chief of the area, Tongraan Kugbilsong Nanlebegtang, are seriously engaged in an unusual clash that has also generated disquiet among security watchers.

The ‘supremacy war’ is grounded in a recent controversial move by the Earl International Group (GH) Limited—a new name said to have been adopted by the familiar Chinese-owned Shaanxi Mining Ghana Limited— to “unduly” take over more land in the deprived district for large-scale mining purposes.

That move, strongly opposed by the natives of the area who say the action was being made without due consultation with the appropriate stakeholders, drew widespread anger with some traditional landowners also petitioning the Environmental Protection Agency (EPA) to pay no attention to an application letter written by the Earl International Group (GH) Limited to the EPA for permit.

Whilst the Tindaama were waiting for a reply to their petition from the end point, the Tongraan wrote to the EPA, urging the agency to ignore the petitioners (the Tindaama). The letter is dated 11th September, 2020, and captioned “Re: Objection to Refrain Earl International Group Ghana (GH) Limited from Mining at the Gbane Gold Project.” And it reads:

“Our attention has been drawn to the [above-mentioned] issue said to have been raised by the Tindongo, Duusi and Sawalig Tindamas requesting your outfit [to] not approve of the permit application submitted to your office by Shanxi/ Earl International Mining Group (GH) Ltd. I wish to state that you ignore such a request. The Talensi [Traditional] Council and the paramountcy which is made up of all the traditional rulers (both Chiefs and Tindamas) is the supreme body headed by the Tongraana and it is the supervising authority in the Talensi Traditional Area within the Talensi District. Any matters relating to the mining/land should be brought before the Talensi Council without which remains invalid.

“It must be noted that Stool Land Administration in Talensi Traditional [Area] conforms to the Stool Lands Administrations Act 1994, and all issues related to such matters have to be handled and dealt with according to the [laid-down] procedures. The Tongraana has supervisory, jurisdictional and territorial control of the people, land, rivers, etc. in all of ‘Talenteng’ (Talensi Traditional Area). This should be well noted so as not to allow people who are self-seekers and [confusionists] to create any conflict in the area. It should be noted that the paramountcy has for some time tolerated activities of some persons [who] are inciting people in the area to create confusion in the area. The paramountcy advises that such persons should desist from such acts in their own interest.”

Your letter full of inaccuracies, jokes and borne out of greed— Tindaama tell Tongraan in rebuttal

Eleven traditional landowners wrote back to the EPA, saying the content of the Tongraan’s counter letter was driven by “greed, egoism and parochial interest”.

“When we received the letter, the content appeared as though it was a joke considering the number of grammatical errors and the letting out of stream of thoughtless invectives against the Tindaama and the people of such communities as self-seeking and confusionists who only seek to create confusion in the area. Has Tongraan met with the Tindaama he is referring to concerning Earl International Group (GH) Gold Limited’s intention to do large-scale mining in Talenteng? If he has met with them concerning this issue, what decision was taken about the exploration activities on our lands and when was that decision taken? Tongraan should remember that in May, 2018, the Tindaama in a letter stated clearly and unequivocally that they were not ready to co-sign any lease with him or any of his sub-chiefs. Attached is the letter for reference. Why should Tongraan be responding to a letter that was addressed to a state institution responsible and capable of addressing our concerns?

“The Tongraan, in an attempt to consolidate his position on the matter, churned out a number of inaccuracies on land ownership and administration in his letter to the EPA. What is his locus in attempting to direct the EPA to ignore our concerns? It must be pointed to the Tongraan that there is no such thing like a supervisory body that controls and supervises lands belonging to individuals or clans when it comes to mining activities. His request should rather be ignored. It only exists in Tongraan’s mind purely borne out of his greed, egoism and parochial interest. Tongraan must know that there is something called Social Licence to Operate (SLO) when it comes to mining. The Social Licence to Operate, though an informal contract with the people, [is] yet very critical for success of any mining activity in a community,” the traditional landowners stated in their reaction.

The Tindaama also rubbished the Tongraan’s reference to the Stool Lands Administration Act 1994. They said his claims stood on “mosquito legs” because “he should know that in the Upper East Region, and Talensi to be precise, lands belong to individuals, families and clans with the Tindaama having the oversight responsibility of such lands and not chiefs”.

They made it clear that they would bow under “no amount of inferior tactics” on their demands “to be engaged with, treated fairly and adequately compensated for the use of our lands by Earl International Group (GH) Limited”.

“We are determined to galvanise the efforts of the generality of our people to resist Tongraan and his new found friends (Earl International Group (GH) Gold Limited) in respect of exploration activities on our lands without properly engaging us. The current Tongraan, through his actions and behaviour, seems to suggest that we are in a master-servant relationship with him. His continued tyranny, distortions of historical facts, lack of respect for the people of Talensi is unacceptable. He must be told in plain language that no court in Ghana will endorse his attempt to dispossess landowners of their lands because the historical facts are there for all to see. There is court precedent, as in the case of Bolga Naaba Martin Abilba versus Tendaanam, in which the Supreme Court ruled in favour of the Tendaanam.

“Tongraan must be reminded that his position as a chief was a creation of the colonial administration purposely for easy administration for the colonial British regime at the time. The Tindaan institution dates back to the precolonial era and before the advent of any chieftaincy institution in the Upper East Region. We urge the Environmental Protection Agency (EPA) to hold [onto] granting the company the environmental permit until the social contract between the communities and the company (Earl International Group (GH) Gold Limited) is finalised. Ghana is a democratic state governed by rule of law not rule of war. Tongraan’s posture seems to divide Talensi into pieces instead of building a Talensi with a common goal of development in peace,” the Tindaama asserted.

One among the same traditional landowners is traditionally responsible for burial of whoever occupies the skin as the Paramount Chief of Talensi when he passes on. He is called Tindaan Sobazaar, from Gbeog-Zug.

Tindaama are not just traditionally influential; they are also considered to be spiritually powerful— the reason they are also referred to as traditional priests or oracles of the lands under their care and control. They are always distinctively dressed, usually calm until a threat is spotted and not often seen in public until a special occasion calls for it. Such is the unquestionable reverence they command that even when they appear at any warfronts in Talenteng and raise their guinea-corn stalks, the war ends there and the feuding factions disperse without a word. They are not just “land-lords”. They command “war-lords”, too.