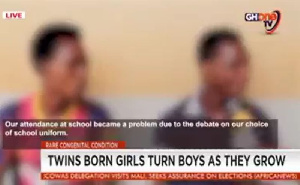 • The two have female and male hormones

This is a rather unusual kind of storyline: they were born and christened as girls but have grown up with male features, accordingly aligning to those new identities but it has not been the easiest of decisions in their lives.

Born with both the male and female reproductive organs, the twins, who were christened Akweley and Akorkor at birth, have continued to face stigma from family, friends, and even their communities.

Born in 1993 in a village in the Yilo Krobo Municipality, the twins have since then been moving from village to village so as to farm, a GHOne TV report said.

Born with disorders of sexual differentiation, a rare congenital condition in which a baby is born with either both male or female reproductive organs, a typical sex chromosome, or with typical appearances of their genitals, the twins want to be able to live normal, regular lives without being stigmatized against.

The only person who gave them hope was their father, an elder of the Apostolic Church, but his death on July 20, 2018, has rendered them hopeless, the report added.

These intersex twins say they continue to have suicidal thoughts.

“What hurts me the most is that people point fingers at us because of our condition. No one wants to employ us because of the concerns raised by community members and so we have to resort to such menial jobs like weeding around people’s properties for something to be able to survive on. It’s as if we came into this world with no purpose. I don’t see the need to be alive anymore,” one of the twins said.

The duo, after a medical examination, are also said to have wombs and ovaries but their male hormones are stronger.

The psychological stress however hasn’t deterred them from pursuing heir football career.

One of them, had a call up to join the Black Queens Under-20 team but was however dropped after a medical doctor detected his condition.

Source: www.ghanaweb.com
Related Topics:boysGHANAIANGIRLSTWIN
Up Next