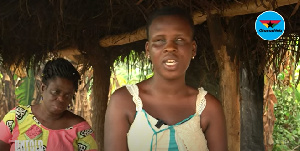 Listening to her soothing voice without taking a close look at her will make it hard to believe that such an amazing voice is coming from the ‘pipes’ of a physically challenged young lady.

19-year-old Jenifer Dede is blessed with the voice of an angel, despite being visually impaired.

Jennifer Dede who lost her sight at age 8 after a surgery, became famous after a Tiktok video of herself preparing gari went viral on social media. The video gathered a lot of attention and interest specifically because she is blind.

Jennifer is crazy about social media and actively started a TIkToK account in March 2021, an account she uses to detail her life at home on the social platform.

In a bid to know more about her, GhanaWeb’s ‘The Untold’ team visited Jenifer in her little village of Odorton in the Eastern region, and that was when we discovered her singing talent.

She perfectly delivered a rendition of Dolly Parton’s ‘Coat of many colours’ and it was fire!

Hitting on the exact key and notes, Jenifer sang word for word as though she was auditioning for a million-dollar music contest.

Jenifer says she chose to start this interview with this song to show her appreciation to her mother for all the sacrifices she’s been making to give her a bright future.

“I appreciate her so much, the efforts and what we’ve been through together… even though we don’t have that money, she still tries she still makes that effort and I’m so so proud of her,” she said.

She dreams of becoming a great musician one day and hopes to become a source of inspiration to many through her music.