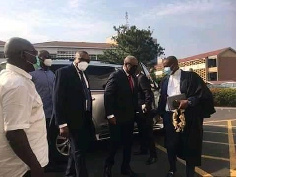 Former President John Dramani Mahama arrived at the Supreme Court earlier today in a very pensive mood ahead of the election petition judgement which is set to delivered this morning, Thursday, March 4.

Wearing a blue-black suit and a white shirt with a tie to match, the National Democratic Congress presidential candidate for the recently ended general election cast a serious look.

He was surrounded by some National Executives of the National Democratic Congress (NDC).

In the next few hours, the former president will get clarity on whether his reliefs as contained in the petition will be granted by the Apex Court.

What is Mahama seeking from the Supreme Court?

The petitioner, Mr Mahama, is seeking a rerun of the December 7, 2020 elections between himself and Nana Addo Dankwa Akufo-Addo of the New Patriotic Party (NPP) because he believes both leading candidates did not obtain 50 per cent of the valid votes as required.

His petition is based on the results declared by Jean Mensa, the Electoral Commission Chairperson on 9 December.

Mr Mahama is also seeking the following reliefs in his petition.

3. A declaration that the declaration is unconstitutional, null and void, and of no effect whatsoever

4. An order annulling the Declaration of President-Elect Instrument 2020 (c.I. 135) dated 9th December 2020, issued under the hand of the EC Chair.