struc This plant can 'cure' an alcoholic, stop your baby from sucking on the thumb - Home Of Ghana News 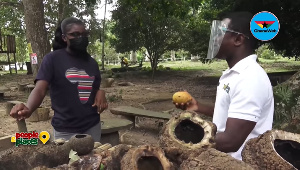 • Though very bitter, the plant has many medicinal properties and helps stop alcoholics from drinking

It’s a huge burden for people when a loved one or family member becomes drawn to alcohol as the first point of comfort.

It’s a different ball game when they become solely dependent on it because more often than not, it distorts their train of thoughts and eventually their lives, and affects the people around them.

Mostly, therapy is what helps most alcohol addicts get over the habit however, the manager of the research center at the Bunso Eco Park in the Eastern Region has touted the Picralima nitida, which is known in the Akan parlance as the ‘Akuamma plant’ as a remedy for this.

Asare Frimpong who manages the Bunso Eco Park explains that the park which has 610 species of plants has 90% of them with medicinal properties and some 3% with ornamental properties.

Among these plants is the Akuamma plant which has, through research, proven to have amazing health benefits for the human body.

According to him, the plant, whose parts including the seeds and bark are very bitter, has healing properties and cures diseases including stomach upset and indigestion.

Speaking to GhanaWeb’s Wonder Ami Hagan on the People&Places show, he explained that the plant also has over time, been used traditionally, to manage alcoholism in people, as well as used to prevent prolonged sucking of the breast in babies.

“Anything nitida in Latin means bitter in English. It is 5 times bitter than the bitter leaf and if you take it, even the next morning, your mouth will still be bitter. But it is rich in Alkaline and we all know it neutralizes the pH acidic content therefore if you are suffering from indigestion or any other stomach problem, it heals them. It is very hard to take,” he stated.

“They use it to deter kids from sucking on their thumbs or breastfeeding because it’s very bitter. When you want to stop someone from taking alcohol, sometimes you grind some of them (it’s colourless) and then you mix it with the alcohol. When the person takes it, they’ll vomit and that’s it, they’ll never take alcohol again,” he added.

He also mentioned the Myrrh plant, which he termed ‘Krobo’ in Twi. The plant, according to him was used by the Krobo ethnic group for their puberty rites; ‘Dipo’.

The liquid from this plant he says contains fragrance and is white in colour. It was used for the markings on the body of these adolescent girls, to keep them smelling nice even days after the rite.

Watch Asare Frimpong explain the uses of some rare plants below:

Discover more in the full video of this edition of People&Places with Wonder Ami Hagan: