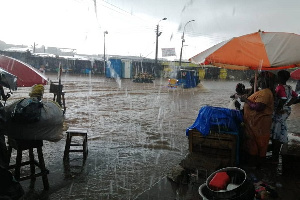 Three bodies have been found following flooding that occurred at the Ahenema Kokoben suburb of Kumasi on Monday night.

The victims were onboard a Kia Truck but jumped off as the flood pulled the truck to the wrong side of the road.

They were subsequently swept away by the heavy flood

Speaking on the Morning Starr, Metro Director for NADMO in Kumasi Frank Dodoo disclosed “we have three bodies that we’ve found and one is in the hospital at the moment.

“I can’t tell you the number of people that have been displaced but those who are at streams, especially along the Atwima Kwanwoma and the Kumasi Metropolis are all affected.”

He however advised that “most of the developers shouldn’t just go and buy land. You have you check that the place earmarked for you is not on a waterway.”