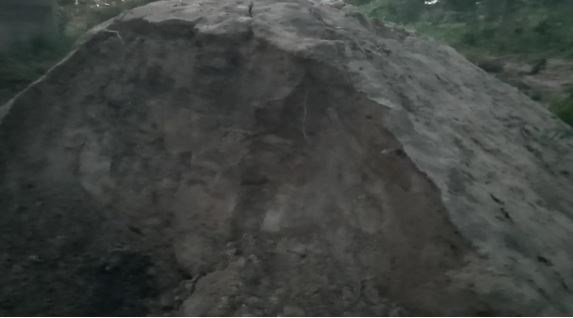 A Tipper Truck has offloaded sand onto a one and half-year-old baby boy to death at Awutu Ahuntem near Bawjiase in the Awutu Senya West District of the Central Region Thursday dawn.

Information gathered by EIB Network Central Regional Correspondent, Yaw Boagyan indicates that when the fully loaded truck reached its destination, the owner of the sand came out of his room to direct the driver where to offload the sand, not knowing that his little son was following him.

Unfortunately, the driver who did not check the environment and was oblivious of the little boy’s presence offloaded the sand onto him.

Upon the father raising an alarm, the neighbours decided to search through the sand only to find the lifeless body of the baby trapped beneath the sand, throwing the people into a state of shock and weeping.

The driver upon interrogation said he did not see anybody standing where he was directed to tip the sand hence offloaded it as instructed by the child’s father.

The father of the deceased also said he was unaware that his son was following him when he stepped out.

The case has been reported at the Awutu Bawjiase Police Station for investigation and the driver was arrested to assist in investigation.

Meanwhile, the body of the child has been deposited at the Mortuary for preservation.

Teacher, 25, found dead in his room