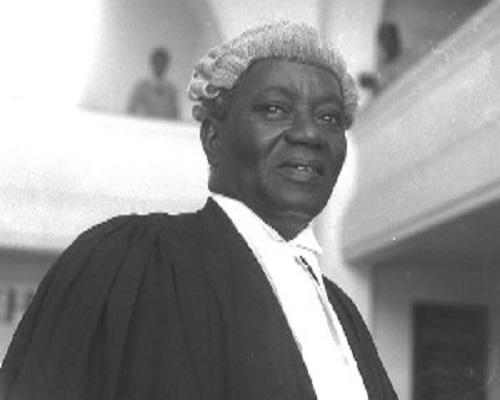 On this day in 1965, Dr. Joseph Kwame Kyeretwie Boakye Danquah, a Ghanaian politician died at the Nsawam Prisons.

Dr Danquah who was a scholar, lawyer, and one of the founding fathers of Ghana died in prison while serving a prison sentence over his alleged involvement in an attempted assassination on the life of Dr Kwame Nkrumah, then President of Ghana.

Read details of his death as published by eaumf.org below:

Dr J. B. Danquah stood as a presidential candidate against Nkrumah in April 1960 but lost the election. On 3 October 1961, Danquah was arrested under the Preventive Detention Act, on the grounds of involvement with alleged plans to subvert the CPP government. He was released on 22 June 1962. He was later elected president of the Ghana Bar Association.

Danquah was again arrested on 8 January 1964, for allegedly being implicated in the Ametewee assassination attempt against the President. He was admitted to Nsawam Prison and placed in the Condemned Section (Special Block) in Cell No. 9 on the upper landing.

The cell is approximately 9 feet by 6 feet in area, secured by a solid door with small open grille in the top half of the door and barred window high up in the rear wall.

The cell contained no bed or other furniture other than a chamber pot. He reportedly suffered a heart attack and died while in detention at Nsawam Medium Prison on 4 February 1965.

After the overthrow of the CPP government in February 1966 by the National Liberation Council (NLC), Danquah was given a national funeral and his status was rehabilitated.

Related Topics:JB Danquah
Up Next