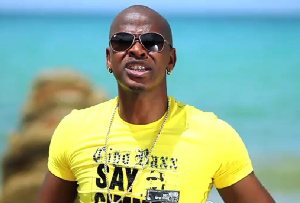 According to him, Akufo-Addo’s decision to build a cathedral is a slap in the face to blacks in the diaspora, especially if the only thing an “intelligent man” like him can do for Ghanaians is build a hundred million dollar church to fulfill his promise to God after his victory in the 2016 polls.

The disappointed artiste who posted a video of his outbursts on social media advised Akufo-Addo to be “wise” in spending taxpayers money and build a historical museum for Africans who were enslaved by Europeans so they have reason to return and learn about Ghana’s rich culture.

He said, “The president of Ghana is building a hundred million cathedral dedicating it to his God for giving him victory in the 2016 election. President Addo seems to forget that it was the same religion that those people came to Africa to use as a means to enslave, rape, mutilate, castrate, and hang us trees.
President Addo is basically slapping us in the face because he wants to please his God for winning an election, I think the best thing you should be doing on spending is to build a historical museum where people like myself, and other people that were taken from Africa can come and learn about the Akan, Ashanti tribe and all the rich culture in Africa. Remember the slave masters were in the church giving praise to Jesus when they were taking our mothers and fathers away.
This is a slap in the face for those of us who want to come back to Africa, it is a slap in the face Mr. Addo and if this is the best you can do with a hundred million dollars or more, it is very sad”.
A school where historical and astrological lessons can be given could alternatively be built with that money, he continued.
“Maybe you should build a school where they can teach Astrology, Astronomy, and Mathematics so our black race can move forward. You are supposed to be an intelligent man to know that your oppressor would never give Ghanaians a God to save us when we are in trouble, just like when they were taking us off Africa”.

Since last year December, the Akufo-Addo led administration has come under a barrage of public criticisms after it emerged that several buildings including the Scholarship Secretariat, Passport Office at Ridge and nine bungalows occupied by Appeals Court Judges are to be demolished as government is set to begin the construction of the House of Prayer.

He said “just as pertained to Solomon’s dedication of the first temple to God as taught by the Bible, he knows that God cannot be contained in a physical edifice”.

But Mr Vegas believes, Akufo-Addo can build more profitable institution which will sell Ghana and Africans and also attract investors.

Mr. Vegas was one of the stellar and unique sounds to emerge in dancehall in at the turn of the millennium. His very catchy 1998 single Heads High, and Hot Gyal Today, a collab with Sean Paul in 2001, dominated the charts for months and gained him global popularity.