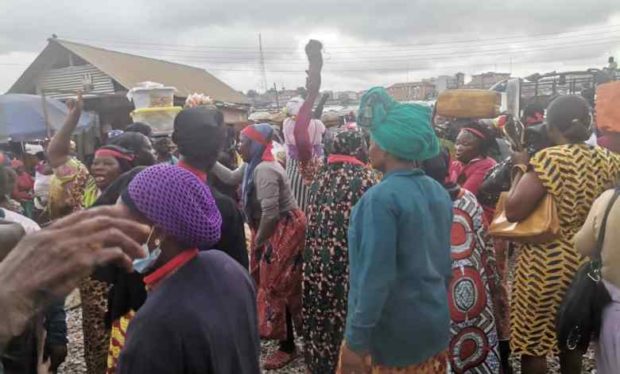 According to the reports, Yam Sellers and Dry Fish Sellers who were evicted recently from the Kumasi Central Market were seeing exchanging blows with Second Hand Goods sellers Association as some of the traders run helter-skelter to find for refuge injuring some in the process.

They accused the City Authorities of allocating same piece of occupied marketers to a different crop of traders to take over which our sources say, infuriated the chaotic situation.

The representative for Asantehemaa at Yam Sellers Line Nana Yaa Foriwaa in an interview with OTEC News Kwame Agyenim Boateng noted that some unknown assailants suspected to be members of the Second Hand Goods Sellers Association in the late hours of Tuesday September 14, 2021 attacked her members with machete forcing them to flee for their lives.

She disclosed that they suspect that their assailants are fighting them in attempt to forced them out of the space they are occupying now at the Racecourse Market and threatened ‘do or die’ demonstration KMA and the Ashanti Regional Minister.

Some of the aggrieved traders said they were living in fears at the Market as a result of the increasing attacks on them.

They added that they won’t sit down aloof for KMA officials or the Ashanti Regional Minister to make a U-turn after evacuating them from the market and give it to a different crop of traders to come and trade at the same market.