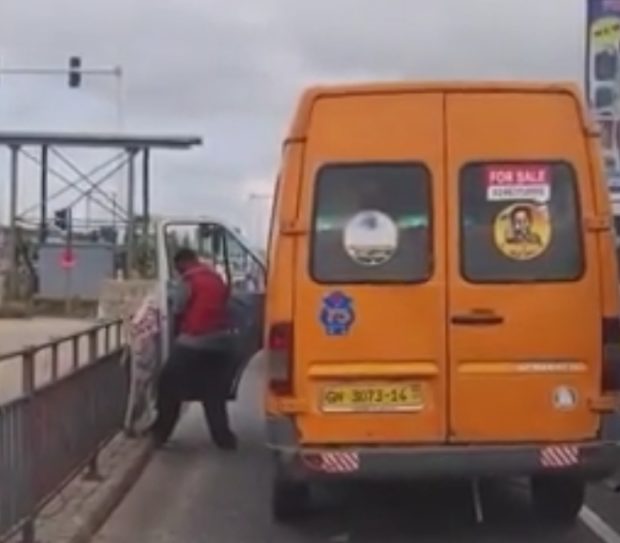 • He was captured urinating along the road during traffic

• He is said to be in grips of the police

GhanaWeb sources at the Police Service have disclosed that a driver of a commercial vehicle with registration number GN 3073-14 who was captured openly urinating on a Highway in a viral video has been arrested.

According to the source within the service, the driver is currently in grips at the Tesano branch of the Motor Traffic and Transport Division (MTTD).

The now viral video which was widely circulated on Tuesday, October 26, 2021, was first shared by Samuel Attah-Mensah, Managing Director of Accra-based Citi FM.

In a tweet shared accompanied with the viral video, Sammens as he’s popularly known indicated that the incident occurred around Alajo junction in Accra.

“This trotro driver stopped right in front of me at Alajo junction to pee and when I confronted him he told me to come collect the pee if I’m against it and he added ..”nkwasiasem aaakwa”. @GhPoliceService,” Sammens wrote in his tweet.

The driver, who thought he could get away with the incident, seems to have now gotten himself into trouble.

The Ghana Police Service, since the emergence of its new Inspector-General, George Akuffo Dampare, is ensuring the service is more efficient in its public duties.

Watch the viral video below:

Sintim vs Ocloo: The High Court ruling that set social media on fire this week

All Ashanti lands are mine, you can go to court – Otumfuo warns