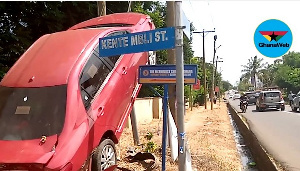 It was a near-death experience as two cars collided in an accident at Dzorwulu on Thursday afternoon.

According to eyewitnesses, the accident was as a result of the driver of the Toyota Corolla attempting to overtake the Hyundai Elantra while its female driver was initiating a curve.

The Toyota then skidded off the road and run into two electric poles.

“She was coming and taking a left turn off the main road coming into the house when the person behind him tried to make overtaking and It hit her” the eyewitness narrated to GhanaWeb.

No injury was sustained by the two drivers. Bystanders helped the driver of the Toyota Corolla to bring down his hanging car.

Officers from the Ghana Police Service were also present to ensure calm and begin investigations into the matter.