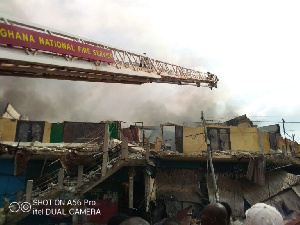 Two persons have been picked up in connection with a fire incident at Aboabo station in the Ashanti regional capital, Kumasi.

Both Kofi Gyimah, a 37-year-old electric welder and Paul Kwasi Kwakye, 51, who is a shop owner – are being questioned by the Manhyia Divisional Police Command.

The electric welder was reported to have been contracted by the shop owner to work at his shop and while in the process the fire broke out of the shop spreading to other nearby shops.

The fire which started just before 11 am Sunday destroyed several properties including plastic chairs, food items and other combustibles.

More than thirty (30) shops in a two-storey building located at Aboabo station in Kumasi were destroyed by the fire Sunday.

At least five fire machines were deployed to the scene to the blaze. It took several hours to bring the situation under control.

Ashanti Regional Spokesperson for the Ghana National Fire Service DOIII Desmond Ackah told reporters that some exhibits have since been retained to assist the police in their investigations.

The affected part of the building has since been pulled down at the time of filing this report.