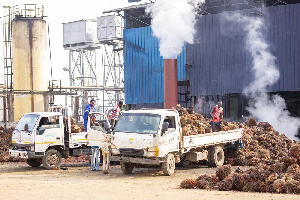 • An explosion has killed three in the Ashanti region

• Two KNUST students on industrial attachment were part of the casualties

• The cause of the explosion is not known yet

Two students of the Kwame Nkrumah University of Science and Technology (KNUST), and another person have been killed in an explosion.

The explosion occurred at the Juaben Oil Mills in the Ashanti region, reports citinewsroom.com.

Other casualties from the explosion are nine persons who sustained injuries and four others whose conditions were so critical that they were sent to the Komfo Anokye Teaching Hospital for medical attention.

The Wednesday morning explosion claimed the lives of the KNUST students who are reported to have been on an industrial attachment.

The news was confirmed by DSP Broni Honnu, the Juaben District Police Commander.

“The bodies have been sent to the Komfo Anokye Teaching Hospital. Two students of the KNUST were involved [in the incident]. They were both on an industrial attachment,” he said.

It is unclear what caused the explosion and how much further damage has been caused by it.