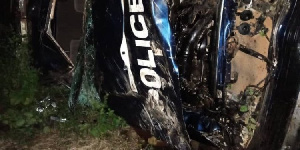 • Officers chasing a robbery gang on the Walewale-Bolgantga road

The Ghana Police Service has tagged October 21, 2021, as “black Thursday” following the death of two of their men who were involved in a car crash.

In a press statement issued by its Public Affairs Directorate, the police service said the two officers attached to the Anti-robbery Taskforce died in an accident on the Walewale-Bolgatanga road while responding to an emergency call.

“Black Thursday for the Ghana Police Service as two highly-trained members of the Anti-robbery Taskforce lost their lives in a fatal accident today on the Walewale-Bolgatanga road.

“The two were part of a five-member team responding to an emergency on that stretch,” the statement said.

The statement further stated that three other officers who were also involved in the accident and are in critical condition were rushed to a hospital for medical attention with plans advanced to airlift them to a different facility.

“The other three officers who were part of the team are in critical condition at a hospital in Walewale in the North East Region and plans are far advanced to immediately airlift them for further treatment.

“The families of the two victims have been informed of the sad incident and the Inspector-General of Police, Dr. George Akuffo Damparehas spoken to them,” the statement added. 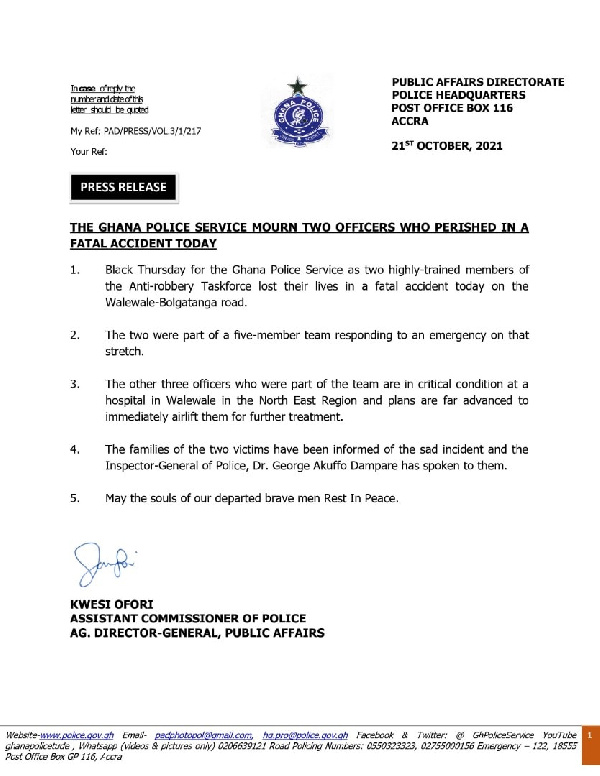 Source: www.ghanaweb.com
Related Topics:ACCIDENTpolice
Up Next