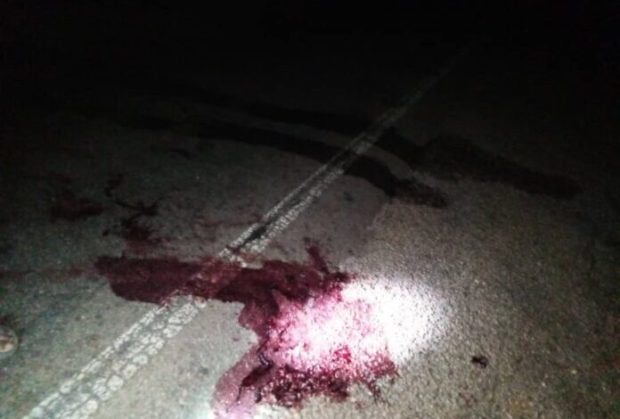 A dawn gun attack by armed robbers on the Bolgatanga-Tamale Highway on two drivers on Friday (today) has provoked a public clamour for immediate transfer of the Upper East Regional Police Commander, DCOP Osei Ampofo-Duku, from the region.

Eyewitnesses say two masked robbers opened fire from AK-47 rifles on the highway at Pusu-Namongo, a community in the Talensi District, on a truck driver who was heading from Kumasi with passengers to Burkina Faso to purchase tomatoes and shot another driver on a trailer truck loaded with bags of cement.

Starr News gathered that the two drivers were attacked and killed just minutes apart along the same route by the same armed gang who also inflicted gun wounds on some passengers and robbed them to an aggregated tune of Gh¢3,000.

Police officers were seen picking empty AK-47 shells from the scene after the strike whilst the bullet-pierced bodies of the parked vehicles dripped with the blood of the slain drivers and the wounded travellers.

“They fired the first driver in the leg. The driver of the truck carrying bags of cement was shot in the head. Nobody could come out from their rooms. The armed robbers were firing haphazardly with AK-47 guns and they were wielding cutlasses. These attacks are now of out of control. The Regional Police Commander needs to be replaced as soon as possible because it is clear that he has failed to protect us. These two deaths mean two funerals for some families just like that and nobody can tell if the passengers who were wounded will survive,” one of the eyewitnesses told a terrified crowd at the scene after the attack.

The bodies of the drivers (one of whom has been identified as Alhaji Moro) have been deposited at the Upper East Regional Hospital’s morgue for autopsy. The passengers who suffered gun wounds in the attack (names withheld for security reasons) are receiving treatment at same hospital.

Angry residents say the latest development is the second bloody raid to have rocked the region within eleven days after storekeepers in the Builsa North Municipality had suspended their businesses and locked up their stores in protest over an outbreak of armed robbery invasions on the region’s western flank.

“This Regional Police Commander will go down as the worst we have seen in this region. We should thank God that the authorities at the Bolgatanga Divisional Police Headquarters, the MTTD and the SWAT in the region are doing their best to protect this region under the trying conditions they find themselves; otherwise, our security situation would have been worse. DCOP Ampofo-Duku is sleeping on the job whilst armed robbers are gunning us down and robbing us every now and then. I can tell you for a fact that police officers are not happy working under this regional commander,” a businessman complained as the blood-stained bodies of the victims were being taken away.

Another armed robbery attack at the same spot

The very spot where the Friday’s deadly attack took place was a scene of a similar raid on Monday January 25, 2021, when a driver and his aides (mates) were shot by four masked armed robbers.

The driver, Adams Sulemana, and his assistants— Abdul Wahab, Fuseini Inusah and Bernard Ali— were journeying from Kumasi with some passengers and wooden tomato crates towards Burkina Faso to buy tomatoes but the Upper East Regional Hospital rather became the journey’s end for them after the robbery gang emerged at Pusu-Namongo around 3:00am and shelled the commercial vehicle from AK-47 rifles.

Bullets hit Adams Sulemana in his left arm and right ribs. Some bullets also went through his abdomen and forced out his intestines. A passenger also sustained a bullet wound in her right thigh. The assailants robbed one of the traders on board the vehicle of Gh¢10,000 and CFA 2,750 and they took Gh¢5,000 from the driver.

The armed robbers had bolted with the ‘booty’ before a police team arrived to only bleeding victims and empty AK-47 shells at the scene.

“I just wish the IGP would pay a visit to the regional police headquarters unannounced one day and catch the regional commander busy playing Zuma video games in the office while armed robbers are enjoying successful operations at will every day,” a woman said with anger on the Commercial Street in Bolgatanga, the regional capital, on hearing about the Friday’s daybreak attack.

This is about the fourth time residents have clamoured openly for the Upper East Regional Police Commander to be changed. A Facebook user recently took to his own wall to lament what he described as an unprecedented wave of armed robbery attacks at Zuarungu, a usually robbery-free capital of the Bolgatanga East District, and described the sudden change as “scary times”.

2 dead, another in coma after inhaling carbon monoxide at Asankrangwa