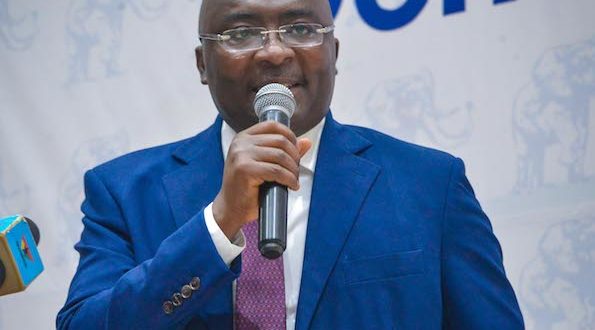 Vice President Dr. Mahamudu Bawumia on Wednesday cut the sod for construction works to begin on a landmark 6,500 housing units at Afiaman, near Amasaman, in the Ga West municipality of the Greater Accra region.

The housing project formed part of the United Nations Office of Project Services (UNOPS) and Sustainable Housing Solutions 100,000 affordable housing scheme, worth five billion dollars, which would be constructed across the country.

When completed, the housing units would have a well-planned community with schools, hospitals, markets, shops, centralised sewage treatment, parks and metered power system.

The UNOPS would run a mortgage term to enable government workers to purchase housing units at flexible terms.

Vice President Bawumia, who was the Special Guest of Honour, speaking at the launch of the project at Afiaman, said the project was a game-changer since it would create about 100,000 direct and indirect jobs for the people and boost the local economy.

He said affordable housing was one of the greatest needs of citizens in Ghana and Africa at large and believed the housing units would go a long way to addressing the over two million housing deficit in the country.

It was in that regard, he said, that President, Nana Akufo-Addo became so interested in the UNOPS project at the United Nations General Assembly in September last year.

Ghana and Kenya were the two countries in Africa that successfully made it through the vetting process.

He said with the coming onboard of the UNOPS programme, it would augment housing projects currently being pursued by Government.

“Government is partnering UNOPS and SHS to deliver a sustainable and affordable housing scheme that would enable working Ghanaians to purchase decent homes,” the Vice President stated.

He underlined the need for a sound banking and financial system in the country to enable Ghanaians to purchase the housing units.

Madam Barbara Aisha Ayisi, the Deputy Minister of Works and Housing, in an address, stated that “having a home is a basic human right, which allows us to live a happy and fulfilling lives”.

She noted that increasing population and urbanisation had made access to homes a difficult challenge in urban areas, which required government support for 60 per cent of the population to get decent houses.

Additionally, 35 per cent of the urban population would not get housing even with government support.

This, she said, required massive support to make housing accessible to all.

She indicated that government, through the Ministry, had undertaken a number of initiatives to bridge the housing deficit.

She stated that the UNOPS/SHS and Government of Ghana partnership would yield the needed results in providing decent homes for Ghanaians.

She said it would also create local jobs for thousands of people, boost the Ghanaian economy and help bridge the housing gap.

Ms Crete Faremo, the UN Under-Secretary General and Executive Director of UNOPS, on her part, said the project was expected to cover over 800,000 homes across Asia, Africa and the Caribbean.

She said it was the largest affordable housing scheme ever seen in the world and mentioned other beneficiary countries, as India and Pakistan in Asia while Ghana and Kenya from Africa.

Ghana, with an estimated housing deficit of over two million, which is projected to increase to 2.2 million in a few years, will receive about $5.3 billion to construct the affordable houses across the country.

The new partnership will also explore new opportunities in the renewable market, with UNOPS expected to work with MYRA-SHS Energy, a subsidiary of SHS, which focuses on investments in renewable energy projects and associated infrastructure.

It is the latest step in the UNOPS Social Impact Investing Initiative, which aims to attract financing from the private sector to develop projects in emerging markets.

The technology is earthquake and hurricane resistant and constituent with the utilization of renewable energy and non-toxic insect-repellent properties.

The concept aims at providing a ‘turn-key solution’ to reduce the current shortfall of tens of millions of decent dwellings.

Previous How a father slept with his four daughters in 10 years – 27-year-old recounts experience
Next Nduom releases list of over 4200 companies, individuals and schools owing him GHc423million