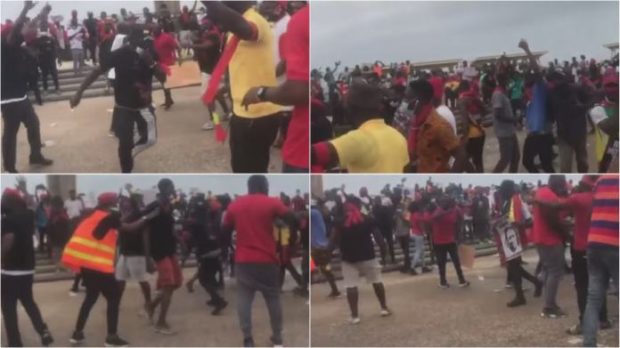 A video which has emerged from the ongoing #FixTheCountry demonstration in Accra has shown livid protestors sacking some media houses from covering the protest.

In a new video sighted by Atinkanews.net , some angry protestors were seen chasing away media crew and asking them to leave.

Amid shouts of “UTV go!”, the protestors massed up and pushed back a media team who boarded a pick-up truck.

The matter was almost getting out of hand when some leaders of the protest tried their hardest to de-escalate the situation.

In the heat of the moment, one of the media men who was at this point in the bucket of the pick-up truck, was sen asking the protestors to exercise some restraint.

It is unclear why the protestors run agog and were preventing some media houses from taking part in the event.

Meet Edem, the man praised by the US govt for being the ‘engine’ behind LGBTQ+ advocacy in Ghana