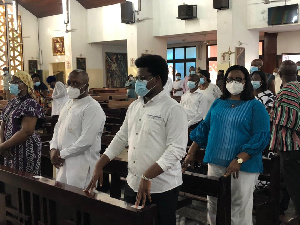 VIDEO: Domelevo recounts how Akufo-Addo influenced him to accept the Auditor-General job

Daniel Yao Domelevo, the immediate past Auditor-General has revealed that then-President-elect Nana Akufo-Addo encouraged him to accept the position of Auditor-General when then out-going President John Dramani Mahama appointed him in 2016.

“In fact, in 2016 when I was appointed, and I was confused as to whether I should accept or reject [it], a call came through from Dr. Matthew Opoku Premeph and after greeting him, he said, ‘hold on for the [then] President-elect’. So Nana Addo Danquah Akufo-Addo encouraged me, he said, ‘Go and take the job’. That is why I am very grateful to him,” Daniel Yao Domelevo told worshippers during his Thanksgiving Mass at the Christ The King Catholic Church in Accra on Wednesday to mark the end of his embattled service to the nation.

He added that “our relationship [with President Akufo-Addo] has been cordial since then and I am grateful to him for his support”.

Domelevo continued: “As the bishop has said, we are here to thank God and we are here to do that irrespective of what has happened…I would like to thank former President John Mahama who appointed me as the Auditor-General of Ghana. I thank him for the opportunity to serve my motherland. I would also like to thank President Nana Akufo-Addo for working with me.”

Daniel Yao Domelevo was recently asked by President Akufo-Addo to retire because records made available to the latter by the Board of the Audit Service indicated that he, Domelevo, had passed the retirement age of 60 years.

The Audit Service Board also stated that Domelevo was Togolese, and was therefore not qualified for the job, but the president left that out of Domevelo’s termination letter.

This was after the president had forced Domelevo to go on a 167-day accumulated leave, and was about returning to work on 2 March.

There were public concerns that the outgoing president was making “last-minute” appointments to key public offices to frustrate the incoming administration although the Constitution gives the president the power to make appointments until the expiration of their term.

In his homily, His Grace Gabriel Kumordzie, the Main Celebrant for Domelevo’s Thanksgiving Mass who is also Bishops of Keta-Akatsi Diocese of the Catholic Church, stated that Daniel Yaw Domelevo has left a legacy that will continue to be on the lips of many Ghanaians.

Accept ADDO AUDITOR.GENRAL DOMELEVO HIM How INFLUENED Job NANA on to 2021-03-11
admin
Share

Tags Accept ADDO AUDITOR.GENRAL DOMELEVO HIM How INFLUENED Job NANA on to

Previous WATCH| Man confesses, detailed how he sleept with countless women in church
Next WATCH: Beautiful Nurse runs mad after divorcing her husband for a young teacher