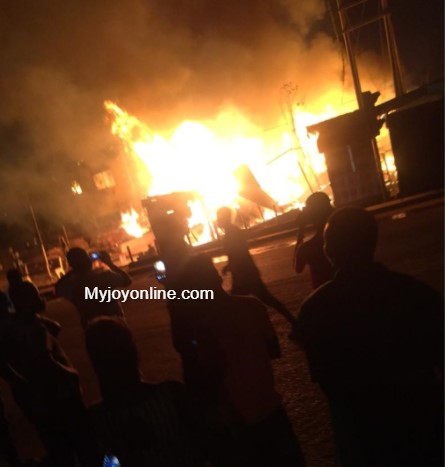 Fire-ravaged a nursery school at Madina in the late hours of Wednesday, February 3, 2021.

The inferno also gutted a carpentry workshop where witnesses suspect the fire may have come from a vicinity known as Social Welfare.

It is unclear what exactly triggered the development which started at about 9:30 pm and continued up the two-storey Golden Angel Nursery School.

Property running into thousands of cedis were destroyed.

However, no casualty was recorded.

Residents say the personnel from the Ghana National Fire Service were unable to quench the blaze which lasted for about three hours, and reportedly vacated the scene to refill their tank.

“The fire service was here a moment ago but they left because their water got finished,” a resident, Dennis Ablordeppey, said.

Residents in the area gathered helpless and watched as the fire rages on from a distance.

Meanwhile, some social media users have shared visuals of the outbreak online.