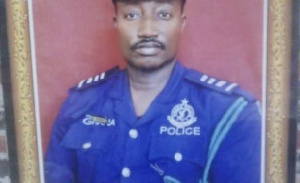 The fifty-year-old police inspector who went missing after going to check his plot of land at Asuboi in the Ayensuano District of the Eastern Region has been found dead floating on a river close to his land.

The deceased inspector, Charles Adamu, until his death was posted at the Police Hospital Accra.

He went missing on Friday, October 30 with his car parked on his land.

A combined police search team from Suhum and Accra after a fruitless search, activated informants response to further assist in investigation and find his body alive or dead.

His body was in a decomposed state with maggots infesting on it.

A mobile phone was found in his back pocket by the police after a search.

The body has been conveyed by the Armed Robbery Unit and CID to the Police Hospital for preservation and autopsy as investigations continue.

About 5,000 farmers register for PFJ in South Dayi