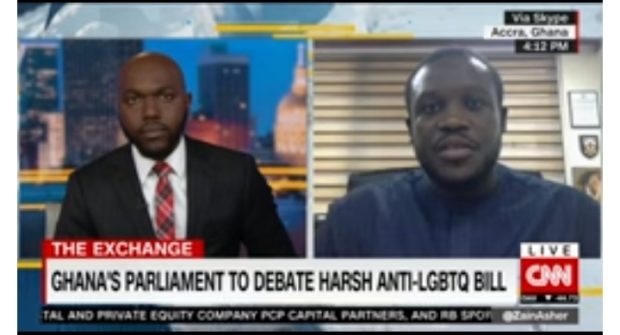 • Parliament is due to debate the Bill this month

The interview conducted by Kenyan journalist Larry Madowo witnessed sharp disagreements between the two, ranging from medical terminologies to, in the view of Sam George, a misreading of the bill by the journalist.

It is the first international interview Sam George has granted over the issue and he reiterated his stance on issues while drumming home the point about why African values needed to be preserved at all costs.

GhanaWeb looks at the major highlights of the interview

Madowo challenged Sam George’s view about hormonal treatment being the same as conversion therapy. But when he conceded not knowing the exact difference but deferring to UN definitions, Sam George pounced.

When Madowo asked about possible links of Sam George to right-wing organization exporting hate speech and reportedly having held a conference in Ghana in 2019, the lawmaker replied:

“It can’t be further away from the truth… we (eight sponsors of the bill) were at this conference….I have had no contact with the world council of families… but we also have groups in the United States that are supporting LGBTQ rights, which is illegal in Ghana as we speak right now, they are also trying to influence staff.

“This bill is in direct response to the opening of an LGBTQ+ advocacy office in Ghana in January that was supported by the diplomatic corps.”

On the subject of clamping down on people wanting to live an open life and seeking a 10-year jail term, the lawmaker accused the journalist of not reading the bill before going on to quote relevant portions of the bill.

“Well, you haven’t read my bill. It is misinformation to say that anybody who is found guilty of a homosexual act, that is a misconception you are peddling and you should not do that on an international platform,” he submitted before reading the relevant section of the bill seeking a five-year jail term.

Are you just a hateful person?

“That is a defeatist approach to ask me a question, that is a defeatist line of questioning. That I am a hateful person,” he said he could not be described as such when the same bill made adequate room for respecting the rights of the LGBTQ activists.

What would you do sir, if your son or daughter was gay?

“Well, thankfully I have two sons and a daughter and none of them is gay.” When Madowo followed up that his question had not been answered, Sam George answered; “You are asking me to go into the realm of abstracts, I am a lawmaker and I deal with specifics.”

When Sam George sought to draw the attention of the host to instances of deaths in America in relation to other issues, Madowo asked that he remains focused because the interview was about Ghana, to which the lawmaker replied.

“If this is about Ghana, then stop trying to import American values into the reasoning of Ghanaian values.”

Sam George stressed further that prior to championing the bill, he met with traditional councils of Ningo and Prampram and had given the go-ahead for him to champion the bill.

About the anti-LGBTQ+ Bill

Currently, the bill has been laid before the house and referred to the appropriate committee for consideration.

The Ningo Prampram MP has strongly defended the need for the bill which he insists is a necessity in preserving the moral and cultural values of Ghanaians in general.

Sam George insists that LGBTQ+ tendencies are not human rights but preferences that need to be regulated within the context of what Ghanaian society and culture accepts.

The bill has the full blessing of Speaker Alban Bagbin who is on record to have said he is pro-life and will ensure that the bill is passed into law as soon as possible.

Part 2 of my tense exchange on CNN with Ghanaian MP Sam George on his anti-LGBTQ “family values” draft law.