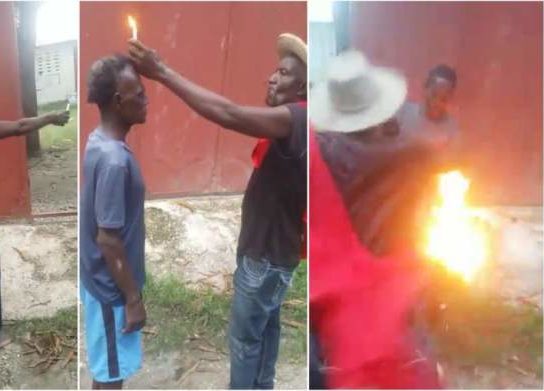 One of the bravest things a guy can do is give himself over to be exploited as an experiment by magicians.

An aged man was utilized as an aid in a video on magic. To perform magic on the old guy, the magician needed kerosene and a candle.

The first attempt was successful, but the second attempt was fatal when kerosene was spilled on the elderly man’s head and caught fire instantly.

The old guy had only offered himself because he trusted the magician, and it had been such a dreadful day for him.

Fortunately for both of them, the old man had very little hair on his head; otherwise, he could have died from the heat or been permanently injured.

Swipe to Watch the video below :

Related Topics:fireMagic tricks
Up Next

PHOTOS: Meet the ever beautiful wife of Osei Kyei-Mensah-Bonsu