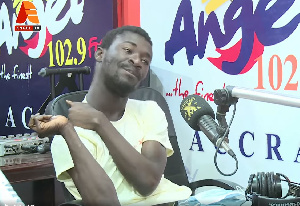 • Edmund Owusu is a 21-year-old with Cerebral palsy

• He has developed a JavaScript payment application

A twenty-one-year-old has given extra meaning to the mantra that ‘disability is not inability.’

Edmund Owusu, who suffers from Cerebral palsy despite his condition, has braved through Ghana’s education system which has limited space for people with special needs to realize his dream of becoming a software engineer.

He attended Mission Day Care from kindergarten to primary three before he transferred to Faith Evangelical Mission School in his neighbourhood at Mataheko in Accra where he completed Junior High School.

His success in the Basic Education Certificate Examination saw him being offered admission by Accra Academy, one of Ghana’s prestigious Senior High Schools.

He however opted for an opportunity to have his SHS education at the New Generation School, a private school that offered him a scholarship.

Currently enrolled in a Software Engineering programme at OpenLabs NIIT, Edmund has already started writing a significant chapter in his success story as he has to his credit, created a payment software with the potential of serving some essential needs in fees transaction.

Giving some details into his family background, Edmund disclosed in an interview with Ohemaa Woyeje of Angel FM sighted by GhanaWeb, that he has a supportive family made up of a Chartered Accountant father and a mother who is a trader.

Edmund also has two elderly siblings; a brother and a sister, as well as a twin brother, who unlike him, has no physical disability and is currently studying Computer Science at the Accra Institute of Technology.

“This (Software Engineering) is something I have always wanted to do. Growing up I use to play video games with my brothers and I was always intrigued by how the characters in a football game move. So that was how I got introduced to programming,” he stated.

According to Edmund, he has not allowed his condition to stop him to live his life to the fullest and explore his potential as he still continues to enjoy playing his favourite video games while pursuing his education.

“In every situation, you don’t have to give up easily because we are all created with one mind, one spirit and one soul. So if you are unable to do something, just go up to God in prayers and ask him to help you become who you are supposed to be in life,” were his words of motivation to the public.

3 persons on motorbike crushed to death at Asuboi