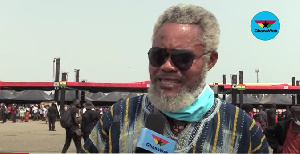 On Wednesday, January 27, 2021, a man who resembles the late Jerry John Rawlings stormed the funeral grounds of the former president.

Having this notion that he looks like Rawlings, he paraded the compound of the Blacks Stars Square as some attendees of the State funeral hailed him as Papa J.

Coincidentally, he’s called John Selasie and is a member of the opposition National Democratic Congress (NDC) in the Kpone Katamanso Constituency.

In an interview with GhanaWeb, he stated that he has intentions of being a president of Ghana one day to replace his role model and look-alike, J.J Rawlings after his demise.

He said he’s ready to act like Rawlings by speaking truth to power as well as live a humble life.

“I am happy people are saying that I resemble him and I am praying that God should open opportunity for me to let me also come into the political limelight. The spirit of Rawlings has entered me so I thank God,” he told GhanaWeb.

Mr Selasie continued that, “I am not surprised because myself I am John…No wonder Ghana we are ruled by four Johns. John Rawlings, John Kufuor, John Atta Mills of blessed memory, and then John Mahama. Maybe I will be the coming president of Ghana, John. I am having an ambition to one day become an MP and to become the president of Ghana and the way Rawlings behaved, I will also behave the same way,”

The late J.J Rawlings was buried on Wednesday, January 27, 2021, at the Military Cemetery in Accra.

He died at the intensive care unit of the Korle-Bu Teaching hospital after battling a short illness.

Watch his interview below.

Akufo-Addo to address Ghanaians on Coronavirus amidst spike