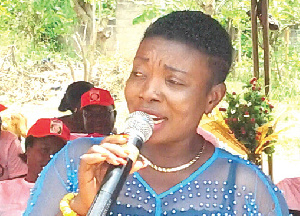 “The chief of this area is foolish and walking around,” this is the exact quote District Chief Executive (DCE) for Sekyere East Mary Boatemaa Marfo used in describing Mponuahene of Asokore Traditional Area Nana Akwantey Boffour. The appointee who is heard in a leaked audio scheming against the Member of Parliament (MP) for the area, Dr Nana Ayew Afriyie, wants her supporters to choose whoever they deem fit irrespective of the person’s political affiliation.

She is heard saying that there is no way she would vote for the party’s candidate who is the incumbent Member of Parliament (MP) for the constituency.

“Those of you who are my supporters must use your conscience in voting. If you see me campaigning and mentioning his name [MP] does not mean I will vote for him. We must work towards reducing his votes so that the President will know that I am not the problem but rather he is the one. The rules of the party do not allow me to campaign for an independent candidate but as for me, I will not vote for him,” she revealed in the leaked tape.

She added “Don’t mention my name but voting for Afriyie is not possible. If someone asks you, you tell them you do not know where I belong. The treatment meted out to us by this MP makes it impossible for some of us to vote for him. At the end of the day, his votes will reduce.”

It is unclear what actually the chief may have done against the DCE but without recourse to the status of the traditional leader, she described him as foolish.

It may be recalled that, at the behest of the Paramount Chief of the Effiduase-Asokore Traditional Area, Nana Dr. Susubiribi Krobea Asante, the traditional council at a press conference called on the president to remove Madam Boatemaa Marfo in April.

Nana Osaberema Asare Ankoma Boama III had alleged gross insubordination against the DCE and declared that she is unfit to be at her post.

The Chiefs from the area also accused the DCE of failing to heed a call on her for the settlement of disputes between her and some assembly members.

“We cannot work with someone who has failed to heed calls by Chiefs for her to come and sit down with us so we settle a dispute between her and the party executives . . . the dispute is hampering our development so we are very concerned,” one of the Chiefs said on Kumasi-based Angel FM.

The chief further said once she refused to heed those calls, she has to be sacked by the President.

“Not even the President will refuse calls by the Traditional Council, therefore, we can only join the calls by her accusers . . . we can’t allow this to impede our development,” he added.

Irregularities cited in US$150 coronavirus test at Kotoka Airport