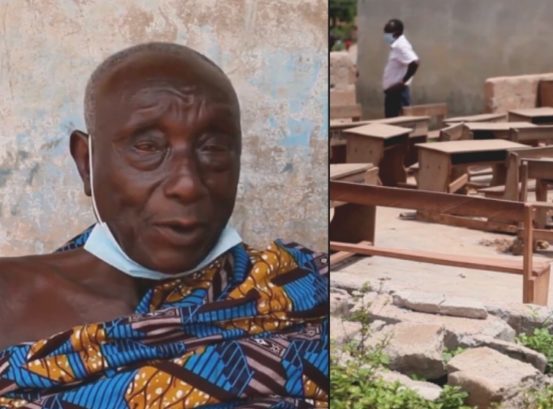 Kindergarten children at Adumasa in the Ashanti Region have been left with no place to school following the demolition of their school.
After rainstorm ripped off the roof of their old school, a temporary structure was built to house the Kindergarten of the Adumasa R/C Primary School.

Parents have voiced out their frustration to the media as they worry this will make their wards lag behind in their academic work.

“About a week ago, some men started demolishing the structure, they claim it was the directive of the chief. I was very troubled when I heard this because the kids will have no place to study,” a parent complained.

Nana Gyekye Amponsah, the head of the Bretuo Clan who led the demolition said he was instructed by the chief of the town.

“The community contributed to build a place for the kids when their numbers increased. Recently, the chief informed me that the roof has been ripped off and he has informed the district assembly who has given him the nod to demolish the structure because of developed cracks.

“So the chiefs paid the carpenters, I only took care of the materials,” – The head of Bretuo clan said

The Chief has however denied giving instruction for the school to be demolished but he admitted he has plans for the land.

Big churches ganging up against Muslims in Ghana – Sheikh Aremeyaw

Ghanaians have been complaining of hardship in the country and have lost trust in the ruling New Patriotic Party(NPP) spearheaded by Nana Akufo-Addo.

The majority of Ghanaians have complained over the lack of employment in the country, power outages(dumsor), water shortage, bad roads, among other issues.

However, an overly frustrated and peeved man has been spotted in a video ‘whipping’ the poster of president Nana Akufo-Addo and vice president Dr Mahamadu Bawumia for disappointing Ghanaians.

According to the man, he has not benefited in any way after he voted Akufo-Addo and it has been suffering throughout his tenure of administration.

The Video has amassed massive reactions on Facebook with the majority of Ghanaians agreeing with the man that the country is in hardship and the leaders are not helping in any way.

A middle-aged man has been shot dead by his friend at Akuapem-Apiredi in the Eastern Region following a confrontation over a Ghc5 debt he owes him.

The deceased whose name was given as Ben, a drinking spot operator, was shot twice on his chest by Kwame Dankwa, a 50-year-old hunter who had confronted him to pay his debt.

Ben was reported to have refused to pay his creditor, a situation which angered Kwame who pulled a locally manufactured gun and shot him.

A resident of the town, Kwabena Ofori told JoyNews, the deceased was pronounced dead on arrival at the Tetteh Quarshie memorial hospital in Akuapem-Mampong.

“Kwame Dankwa went to Ben who operates a drinking spot to collect his Gh₵5 he claimed the man owed him but when he approached him he also failed to pay the money so it turned into a fight and Kwame Dankwa shot him twice. When he was sent to Mampong he was reported dead,” he explained.

Meanwhile, the suspect has fled to an unknown location when residents attempted to apprehend him.