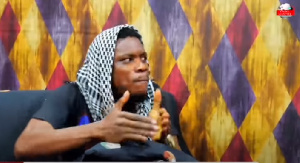 Nana Osei Bonsu Hoahi II, a supposed palm wine tapper of the Otumfuo has revealed that over 30 pastors have been lined up to be exposed by Kennedy Agyapong’s Net2 TV as fake pastors.

The Assin Central Member of Parliament recently announced reigniting his series of exposés aimed at exposing some fake pastors in the country.

In an interview with Oman Channel, Nana Osei Bonsu who is also on a personal venture to expose some pastors he has labelled as fake said he is aware over 30 pastors are going to be exposed by the host of Net2 TV’s Hot Seat programme, Kwaku Annan.

“Agya Nyame is in there, Obinim, Elisha Osei Kofi, Opambuor Ebenezer Adarkwa Yiadom are all part of the list. Otabil is not part. But they are a lot. They are numbering about 35 on the list,” he stated

According to Hoahi, he holds no personal grudges against any of the pastors but he has a distaste for the deeds of fake pastors.

“I dislike their character; I don’t dislike their person. We all know what is happening in this country. The downfall of Ghana has to do with pastors, even the poverty has to do with the pastors. Why am I saying this? We live in a country where pastors host church members from Monday to Friday.

“Meanwhile, there are churches in America and Europe too but you don’t see the white man sitting in church during their working hours. But in the black man’s case, we carry cutlasses and other items to the church every day saying we are going to butcher the devil. That is foolishness,” he fumed.

Watch the interview below: