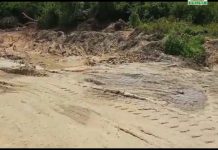 The destruction of the 339 hectares of land, which was acquired by Dr Kwame Nkrumah but now being destroyed by people, has been described by the residents of Gomoa as worrying.

In an interview with Adom News, they revealed that though several complaints have been made to stop the illegal operators, they are yet to see any change.

“These illegal sand winners and estate developers are destroying all our farmlands which are our sources of livelihood and food. It is an investment which we could leave for generations yet to be born but it is now being destroyed,” they lamented.

Meanwhile, the Winneba District Forestry Manager, Dorothy Damson is appealing to the government to put measures in place to end the menace.

The District Chief executive for Gomoa East, Solomon Darko Quarm gave the assurance that he will do everything possible to end the menace to save the forest.

The Gomoa Dominase District Police Commander, DSP Paul Ankan, who led the team in a visit to the reserve, appealed to Ghanaians to desist from selling and destroying state property.

Previous VIDEO: Chinese woman arrested with 2 trucks of rosewood in Tamale
Next BREAKING NEWS: Motor rider knocked down and killed by Truck at Kumasi Tanoso