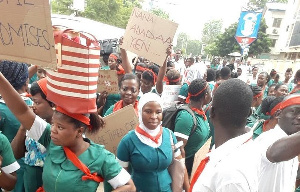 The Ghana Registered Nurses and Midwives Association (GRNMA) says the Government of Ghana rejected eight proposals they presented which detailed how their poor conditions of service should be addressed in order to avoid any strike action.

In an audio which was sent to their members and intercepted by GhanaWeb, an executive member is heard saying that out of the eight proposals, four would benefit all Registered Nurses and Midwives whereas the other four are specific which address matters of the association.

“The four for all of us to enjoy are transportation; and they are to give us 15% of our basic salary, a rent of 25%, uniform allowance of 10% and professional development allowance of 25%,” the executive member said.

He continued: “As I tell you, they kicked against all these proposals […] they say they are not going to pay it.”

The executive member who stated that he was directed by the GRNMA Chairperson to explain to the members, noted that as of their last meeting with the ministry, they were told that the government does not pay transportation for nurses.

“They rejected the rent. On the issue of uniforms, they told us that they will buy the uniform material and distribute it to us, but we know our uniform is not just the material we are wearing. It goes with accessories, the shoe, the cup, the apron, the breast watch and others. So, we told the employer, these are things we need to work within terms of the uniform but the employer is adamant,” he explained.

He added that, as part of their specific needs which they presented to their employer, the GRNMA was demanding, “rural incentives for our brothers and sisters who work in the rural areas […] we requested for 20% of their basic salary for them and this one was rejected. They told us that they are yet to know which areas are considered rural areas in Ghana.”

The executive member indicated that their employers only agreed on the fuel allowance, “which is 40 gallons and but that one starts from the PNO [Principal Nursing Officer]. And our argument is that most of our nurses, the certificated holders don’t even get there; the highest a certificate holder can get is the NO [Nursing Officer] or SNO [Senior Nursing Officer] and they will retire; they will never enjoy this. Most people also do not even get there, so it should be given to specific people at specific ranks and not at the level of the PNO, so we rejected that.”

The GRNMA further explained that on their request for a “book and research allowance”, the employer noted that it will be paid to only degree-awarding institutions.

“We have NTC and other colleges who do research…when you go to Ghana College for Nurses and Midwives, they do research…, they have rejected that one as well,” the male executive member said.

The executive member further stated that the decision to go on strike was taken after consultation with the council executive.

“We all agreed unanimously on the strike action. This thing that we are doing is not from the national executive, but all of us. We must all get involved whether you belong to CHAG or wherever,” he charged.

The Ghana Registered Nurses and Midwives Association (GRNMA), the Ghana Physician Assistants Association, and Ghana Association of Registered Anaesthetists are joining the strike action by laying down their tools in order to seek for better conditions of services from their employer.

All Nurses, Midwives, Physician Assistants (PAs) and Certified Registered Anesthetists (CRAs) in all public institutions including Christian Health Association of Ghana (CHAG) healthcare institutions are withdrawing their services from 8:00 am on Monday unless there is a Government intervention.

Listen to the official below.