struc WATCH: Do or die’ t-shirts pop up on social media - Home Of Ghana News 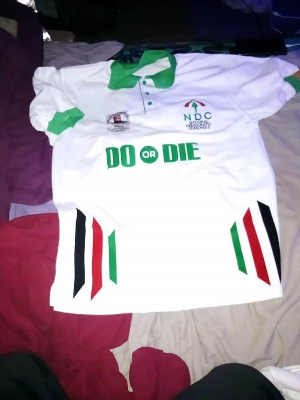 • This follows some comments from former President, John Dramani Mahama

The conversation around some ‘do or die’ comments made by former President John Dramani Mahama has sparked diverse reactions from the public since its emergence.

Whilst it has largely been condemned, some party members have justified the remarks, stating that it was an idiomatic expression.

In the midst of these debates, some NDC-branded t-shirts with the inscription ‘Do or die’ appear to have emerged on social media.

It is unclear the source of these t-shirts but pictures posted by some tweeps show the t-shirts with various captions attached.

In some instances, videos of supposed party fanatics wearing the t-shirts were posted.

Meanwhile, there has been no official communication from the party regarding this.

Mahama, during his ‘Thank You’ tour of the Bono East Region, said, in an interview on Akina FM, a local radio station in Techiman,

“The 2020 elections were rigged for the NPP. We have however accepted the ruling of the Supreme Court for the sake of peace. However, come 2024, the NDC will be extra vigilant at the polling stations because that is where the elections are won.”

He has however explained his comments, insisting it was an idiomatic expression and not a call for violence.

“… They don’t understand ‘do or die’. ‘Do or die’ is an English idiom,” Mahama explained. “In Africa, we have many proverbs and we sometimes don’t say things in the straight format: we use proverbs. In English, we have idiomatic expressions.

Those who left school early don’t understand idiomatic expressions. ‘Do or die’ means a critical assignment you have, and so you must do the needful or perish.”

He added: “What I mean is that the NDC should not wait and go back to the Supreme Court. Whatever has to be done at the polling stations and collation centres must be done. And so I don’t retract: the next election for NDC is going to be a do-or-die affair.

Here are a few of the posts: